Andrew Jones is a Teaching Fellow at the University of Birmingham.  His research examines the rise of modern humanitarian organisations in Britain, with a focus on those agencies connected to the Disasters Emergency Committee (DEC).  Originally set up in the 1960s, the DEC has recently been in the news for its ongoing Ebola outbreak appeal.

For humanitarians, 2014 has been a year of crises which have stretched the international aid system to ‘breaking point’.  Now, leading British aid agencies such as Oxfam and Save the Children have once again jointly mobilised to respond to a global emergency under the umbrella of the Disasters Emergency Committee (DEC).  The DEC is a familiar actor in Britain as it coordinates the fundraising of thirteen humanitarian organisations for large-scale disasters.  It does so primarily through making joint appeals on television for public donations to support relief work.  Originally set up in the 1960s, the DEC has made over sixty such appeals to the public in the decades since then.  However, its current appeal appears very different to anything that has come before, calling for funds to tackle the ongoing Ebola virus epidemic in West Africa. 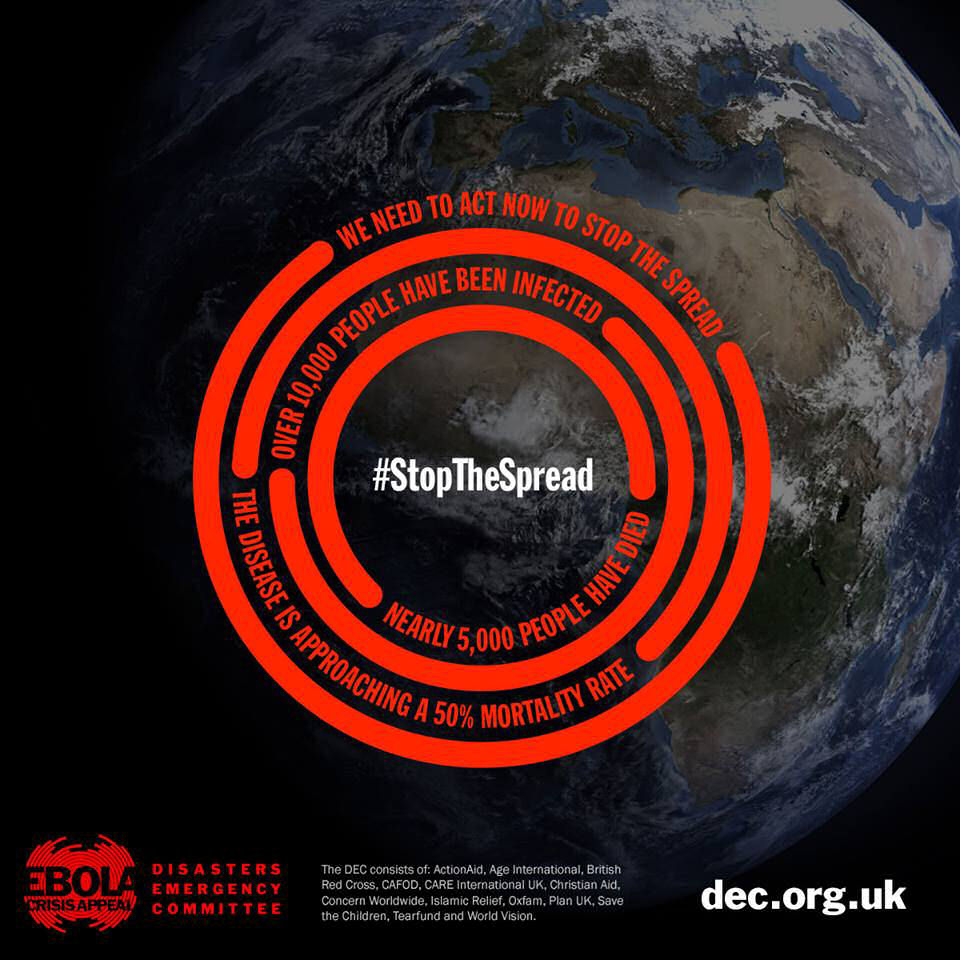 As the DEC has repeatedly stressed, this is the first time that it has launched an appeal for a disease outbreak.  Various media outlets have picked up on this as a newsworthy story in its own right, echoing DEC Chief Executive Saleh Saaed’s remarks that the Ebola appeal is ‘completely unprecedented’.  So far these publicity tactics have been effective; at the time of writing, the DEC has raised twelve million pounds in six days.  The emphasis on the appeal as exceptional represents an interesting use of the past.  It also suggests that now may be a timely moment to reflect back on the history of the DEC.  Of course, presenting a systematic historical evaluation of the DEC is well beyond the confines of a blog post.  What follows is a brief introduction to the DEC and what it suggests about humanitarianism in Britain.

The DEC was set up in 1963 by what were then the ‘big five’ British humanitarian organisations: Christian Aid, Oxfam, the Red Cross, Save the Children, and War on Want.  Their coming together was presented as a pragmatic step to enable collaboration, but it was also a response to the new power of television as a medium.  In the early 1960s, individual aid organisations discovered that emergency appeals on television could reach larger audiences, and generate more donations, than previously thought possible.  More money also meant more rivalry and the DEC was devised to dampen competition between its members.  The Committee met after major disasters to pool information and initiate joint action.  All five members had equal authority, with decisions taken by majority vote.  Representatives from government and the media were also invited to observe and contribute. 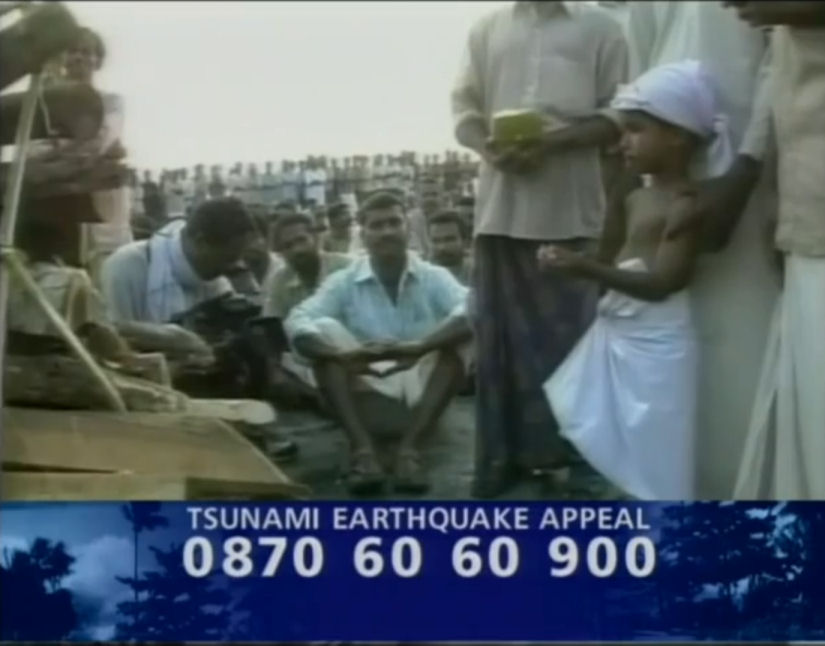 Crucially, the DEC was granted exclusive arrangements with the BBC and ITV to air emergency appeals in primetime television slots after major disasters.  This gave its members a unique level of access to television.  British charities were not permitted to purchase advertising on commercial television until the 1990s, while conventional appeals on the BBC were tightly regulated.  These arrangements with the broadcasters continue today, now widened to include Channel 4, Channel 5, Sky, and a range of corporate partners.  The DEC’s first appeal was in 1966 for an earthquake in Turkey.  This raised £560,000 (about nine million pounds in today’s money) and the Committee has been making regular appeals ever since.

The history of the DEC captures the importance of the mass media, especially television, to the sustained rise of humanitarianism in Britain in recent decades.  It is through the media that society encounters disaster and bears witness to distant suffering.  The most successful DEC fundraising drives have all been launched to capitalise upon widespread public sympathy already created by dramatic news reports of overseas disasters.  These have ranged from Turkey in 1966, to Bangladesh in 1970, Ethiopia in 1973 (and again in 1984), Rwanda in 1994, to the Indian Ocean in 2004, and Haiti in 2010.  In all of these cases, the DEC acted quickly to position itself as a channel for public sympathy and raised massive sums from the public.  The standout example of this remains the 2004 Indian Ocean tsunami appeal which raised a remarkable record sum of £392 million.

However, modern aid agencies are also beholden to how the mass media operates —pursuing ratings, roaming quickly from one emergency to the next, drawn to simplistic accounts and negative images of distant suffering.  In the rush to raise money, DEC appeals have often provided a simplistic view of overseas emergencies, presenting them as existing outside of politics and easily solved with more cash.  More recently, the DEC has strived to provide concrete information concerning how its members spend their funds, and the contexts in which they work, to the public.  This contrasts with many early DEC appeals which provided little information of substance to viewers beyond guilt-inducing calls to give money.  Many DEC appeals have relied heavily on graphic images of starving children which have been consistently effective at raising money from the public.  The use of such images has been denounced within the aid community since the 1970s for promoting an unethical view of the world and reinforcing problematic stereotypes. 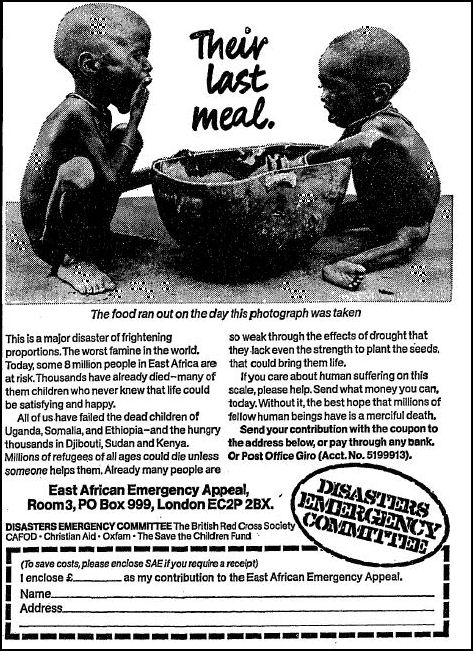 The history of the DEC also sheds light on the impressive growth of the humanitarian sector in recent decades and the competition between aid agencies that this has created.  The DEC was set up to dampen rivalry between its five founding members.  It also excluded non-members from the benefits provided by television appeals.  As the British humanitarian industry grew in size and number, the DEC came to be perceived by other organisations as a self-interested ‘cartel’ which refused to open up its membership.  These tensions eventually culminated in an independent review into the Committee, triggered by a problematic appeal for the Rwandan genocide in 1994.  This review examined all aspects of the DEC’s operations and resulted in the barriers to DEC membership being relaxed.  The DEC was also formally established as a non-profit organisation with charitable status at this time. The ‘New DEC’ was officially relaunched in 1997, comprised of fifteen members with an independent Council and more professional evaluation methods.  Despite concerns at the time that the DEC would not survive in a more competitive broadcast environment, the Committee has thrived in the years since.  The DEC is now often lauded as a successful model of collaboration for other charitable sectors to emulate.

Clearly, to understand the development of non-state humanitarianism in Britain requires an understanding of the history of the DEC.  But what does this history tell us about the current Ebola appeal?  For a start, it suggests that despite claims to be ‘unprecedented’, the Ebola campaign is actually quite a conventional DEC appeal.  The Committee has responded to public empathy about Ebola victims whipped up by recent news coverage and has harnessed this for fundraising purposes.  This includes television appeals and press advertisements characterised by evocative language, images of suffering children, and dire warnings of impending catastrophe.  These have been reinforced by inventive campaigns on social media under the hashtag #StopTheSpread.  This approach to fundraising and publicity actually fits quite neatly into a longer history of emergency humanitarianism in Britain.

The DEC takes its own accountability and transparency very seriously.  Any money it raises will undoubtedly be put to life-saving uses by its members.  However, the timing of the appeal also raises questions about why it was not launched earlier.  The Committee has received some criticism for being slow to respond to the epidemic.  This may reflect the reluctance of the broadcasters to agree to an appeal for a disease outbreak.  More likely, it highlights how the DEC and its members are continually one step behind media coverage, rather than out in front.  The Ebola epidemic has been unfolding throughout the year and arguably no non-governmental humanitarian agency has done more than Médecins Sans Frontières (MSF) to spearhead the international response.  Revealingly, MSF-UK is not a member of the Disasters Emergency Committee.

For more on the Disasters Emergency Committee, visit: http://www.dec.org.uk/

For more on the DEC Ebola appeal and to donate, visit: http://www.dec.org.uk/appeals/ebola-crisis-appeal