Big Society and the ‘new austerity’

Last month the new economics foundation published its report on Surviving Austerity. Since the Coalition took office they have been following the impact of its welfare reforms and public sector cuts in the poorest parts of Birmingham and London, and these are its findings. They were unsurprisingly bleak, noting for example that ‘in-work poverty has overtaken out-of-work poverty for the first time’ – but they also had some things to say on the government’s big society agenda. They asked: 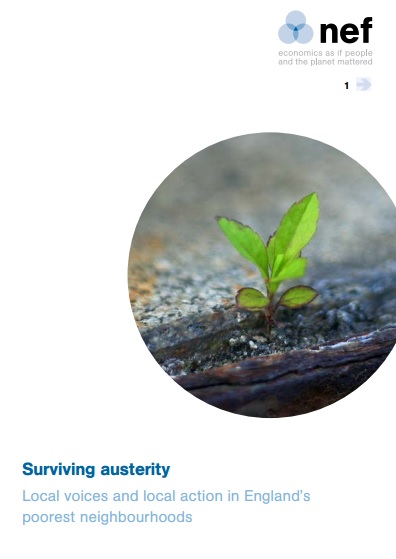 Could the vision of empowered local communities driving forward an agenda of social action and local ownership of public services be put into practice? How would these ideas fare in the context of a prolonged recession and an unprecedented programme of cuts in public spending?

We maintained that, while the concept was problematic, some of its core ideas – promoting social action and enabling greater ownership of public resources at a local level – were appealing.

The report suggested ‘six factors that have undermined the Big Society project and led to its failure as a viable plan for social change in England’. I quickly noticed that none of these was the one I have written about before on this blog. As I wrote when the Coalition marked its two years in power: ‘What, in fact, is most striking is the lack of influence the project has had within Cameron’s own government.’ But, leaving aside my own view that a lack of political will and a failure for it to be incorporated into the government’s public sector reforms has been a key cause of the Big Society project’s untimely demise, let us consider the others identified in this report.

One of their factors was the context of a ‘voluntary sector in turmoil’ – and the challenging times for the sector, not least in the face of government cuts, is something Colin Rochester and Meta Zimmeck amongst others have written about on this blog before. Equally, the failure of politicians to make clear that the two are separated is identified in the report as another factor. Certainly the leading champions of the project, including Philip Blond, have seen it primarily as a problem of communication, letting the notion that the big society was simply a fig leaf for cuts to fester. 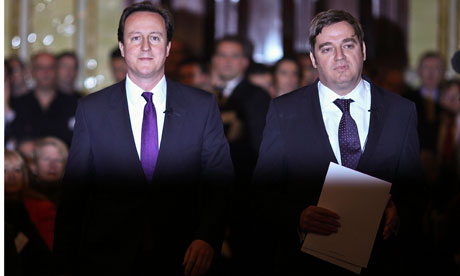 David Cameron with Phillip Blond at the launch of think tank ResPublica in 2009. Photograph: Steve Back www.politicalpictures.co.uk

However, most of the other factors were essentially problems in the thinking behind and informing the Big Society agenda. This will not surprise historians, who have been more than usually sceptical here – from Glen O’Hara’s observation that it is up against some notable historic trends, to Frank Prochaska’s concern it amounts to further centralisation by stealth, and Pat Thane’s assertion ‘that there has always been a big society’.

Amongst the report’s factors was that the thinking rests upon a false dichotomy between ‘big society’ and ‘small state’. In fact, it places this distinction over and above that between central and local, which might be a more productive one for meeting its own objectives. As historian Simon Szreter has noted, the localism of the big society agenda will ring pretty hollow so long as a re-empowering of local government is left out of the picture.

Two related factors were ‘forgetting that the social and the economic are interdependent’ and a weakened ‘the core economy’, defined as ‘the sum of all the activities carried out by people and families’ including ‘informal caring, bringing up children, local campaigning and civic action, membership of faith groups and peer networks, and everyday acts of friendship and neighbourliness’. The central assumption here is that, as people face uncertain times economically and feel a squeeze of their time, they will withdraw from community and charitable activities.

It is fair to say there is a mixed picture from research, including that from the Centre for Charitable Giving and Philanthropy at Cass Business School, about who gives more. Wealthier households do tend to make charitable donations more often and in larger amounts, while poorer households that make donations tend to give a larger proportion of their income. However, this is not just about money. It’s also about time and action. Any historian researching the 1920s hunger marches or the 1980s miners’ strikes, or the countless more prosaic examples of mutual aid and working-class community action, will be suspicious of this idea that when times are tough we think of only ourselves. We may simply need more research, but on the face of it history does not seem to support this – at least not as a universal rule of human nature. A final related factor for the failure of the big society noted in this report was not recognising that ‘not all communities are equal’. To quote the report:

As a political concept, the Big Society obscures the workings of power, and pays scant attention to how inequalities of time and resources differ across areas and groups.

And we might add ‘across time’. What happened to those long-standing and deeply-rooted traditions of mutual aid and working-class activism? Are they going unnoticed today? Did Thatcherism kill them off? Did the weakening of the trade unions and the 1990s Daily Mail friendly reinvention of the Labour Party leave them without a platform? These are questions we need to answer if we are to avoid thinking patronisingly of charity and social action of gifts from the middle classes and the rich.