Teaching the History of Voluntary Action

Where does a passion for the history of voluntary action come from? One of the main sources of this is being taught about an aspect of voluntary action history.  My curiosity was prodded by studying the Attlee governments during A-level History. It prompted many questions in my head about how people in need had managed  before the 1940s, questions I got to answer when doing a PhD on the settlements (and working at one).

The students on the programme I teach on get voluntary action history in a number of ways. It figures in the Contemporary Britain module in the first year, which provides a general history of Britain in the twentieth century, and voluntary action crops up in many ways and places: Edwardian social reforms; the suffrage movement; trade unions; interwar depression; the World Wars; empire; migration; women; political participation; the post-war settlement; and many others. It figures highly in the social policy modules that students can take at all stages of the programme.  That it is such a recurring theme speaks powerfully to how embedded voluntary action is in British civil society. 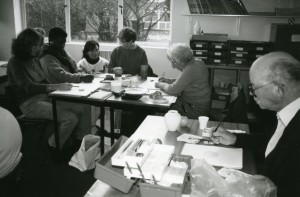 However, I have yet to actually teach a second or third year module that specifically tackles the history of voluntary action, be that at Kent or the other institutions at which I’ve worked. I certainly do research-led teaching – but my research has led me not to a perhaps more traditional history of welfare module. A module on Britain on Film 1930-1960 came about because I was trying to work out how I could use documentary films from 1930s and 1940s that featured either settlement houses or had settlement workers starring in them; I was also intrigued by one of the characters talking about working at settlement at the start of Mrs Miniver, not to mention the exploration of working class life by the British New Wave. I would strongly recommend that anyone teaching the history of voluntary action explores the British Pathé newsreels, the British Universities Film and Video Council, the BFI’s Screenonline and many others for resources for your teaching, so that you can help bring your subject quite literally to life for your class. I also teach political sociology on this programme, which has made me engage with much broader fields than I might otherwise have done.  The dialogue you have with students helps you to work out your research questions.

11 Responses to Teaching the History of Voluntary Action