The following is an edited extract from C.S. Monaco, The Rise of Modern Jewish Politics: Extraordinary Movement, which will be published next month by Routledge.

By the time of the 1905 Revolution, approximately 100,000 Russian Jews were members of some kind of left-wing group (the Bund, Poale Zion or “Workers of Zion,” Social Democrats, etc.). Jewish participation in many of these organizations can be traced to the radicalization that took hold after the first wave of pogroms in 1881. Yet Jews never constituted the nucleus of revolutionary activity. On the other side of the Russian political spectrum was an amalgamation of right-wing, anti-Semitic, paramilitary groups known at the Black Hundreds who saw themselves as upholders of tsarist rule and the Russian Orthodox Church. As a result of a nationwide labor strike and ongoing internal turmoil, Nicholas was forced into significant concessions. By signing the October Manifesto, the tsar agreed to the formation of a constitutional monarchy and the expansion of civil liberties. An elected legislative body called the Duma was also formed. Such a radical turnaround, however, caused a violent backlash from the right wing—including forces within the government. The months following the Manifesto witnessed a severe period of pogrom violence; within the first two weeks alone, 674 pogroms erupted on a shocking scale. Most incidents occurred in the southern regions of the Pale, where armed members of the Bund, organized as part of a self-defense network, were the least prevalent. Arson and pillaging were rampant, and more than three thousand men, women, and children perished. 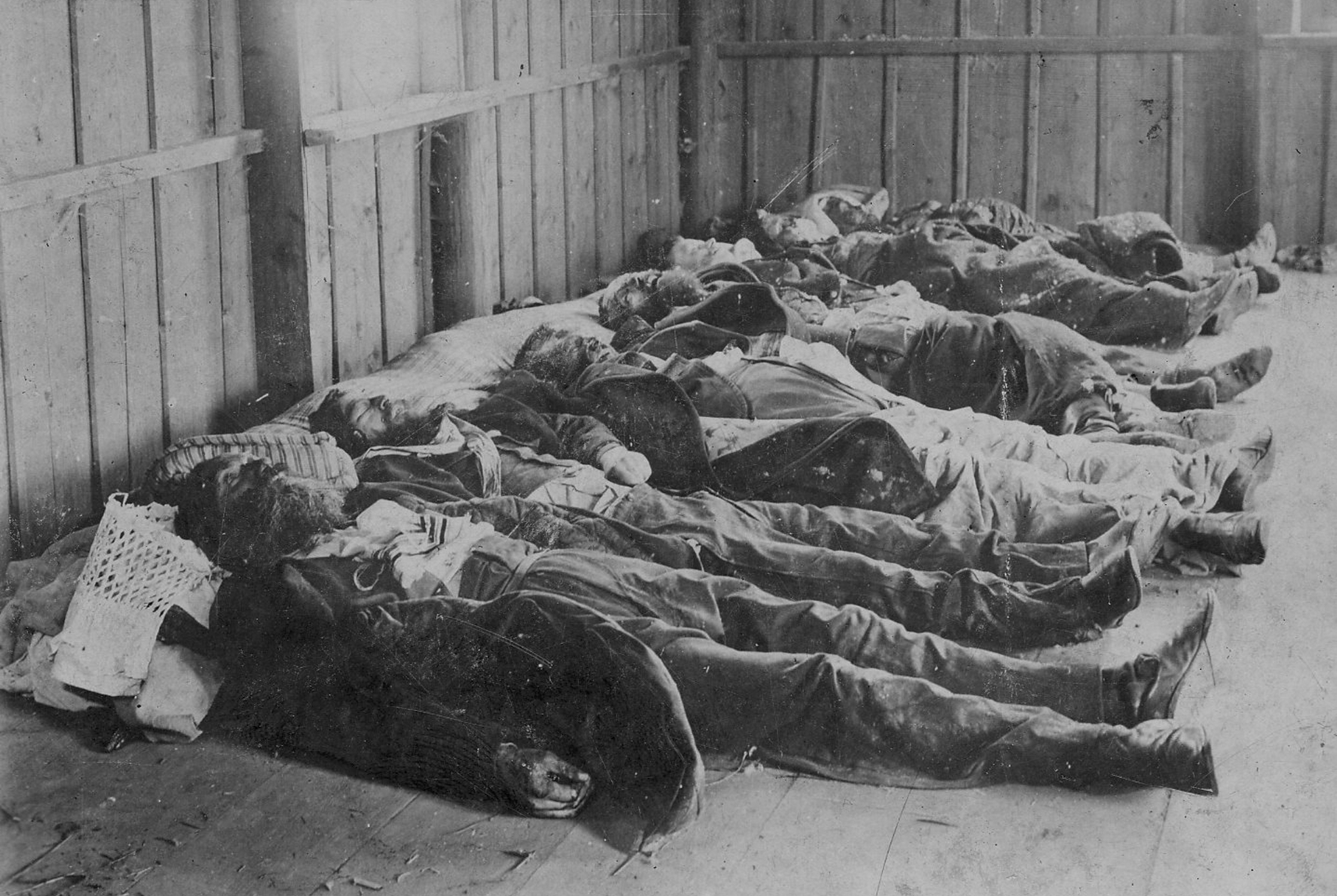 The Kishinev Massacre (1903) became the first humanitarian crisis of the twentieth century to be documented by on-location news photography. Gruesome images, such as the assembled corpses above, swayed public opinion to a marked degree.

Details of these atrocities appeared in the leading papers of Britain and the United States; consequently, calls for public protests were widespread on both sides of the Atlantic. The American response differed dramatically from 1903. Street demonstrations were common throughout the major cities, the most important being the “Mourning March” in New York City. On 4 December 1905, 125,000 Jews, mostly Russian immigrants (including a contingent of 30,000 women), took to the streets in an orderly and well-orchestrated procession. Altogether, 350,000 people either participated directly in the march or gathered alongside as spectators. By virtue of its size and somber authority, the march from the Lower East Side to Union Square was, according to the New York Daily Tribune, “the greatest of its character” to take place in New York. Much of the city’s business was suspended, and impersonal public thoroughfares were transformed (at least for an afternoon) into a deeply moving performance space for contesting Russian brutality and memorializing the dead. Singing had become integrated into the movement’s repertoire, and in combination with “the sounds of muffled drums and funeral marches played by numerous bands,” a heightened sense of theatricality added to the demonstration’s success. “There were in line nearly one hundred organizations,” according to the Daily Tribune, “labor, charitable, socialistic and Zionist, some of them wearing uniforms.” Organized by the newly formed Jewish Defense Association (which had raised one million dollars in relief funds) and headed by Grand Marshall Joseph Barondess, a major figure in the Jewish labor movement (and a former aspiring actor), the procession proved to be an effective display of stagecraft. “The tears, the lamentations, the hysteria of a funeral cortege were all in evidence,” observed the Tribune. At the end of the march, Barondess addressed the crowd that had reached Union Square and read a series of resolutions that denounced the “powers of darkness and hatred, the Russian mob, the Russian rulers, which have brought back the cruelty of the Dark Ages.” 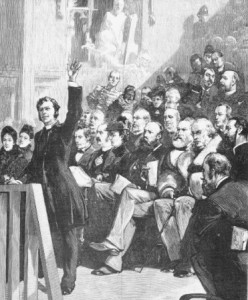 The Bishop of Ripon delivers a stirring oration on behalf of persecuted Russian Jews before an audience of two thousand at the “Great Public Meeting at Guildhall,” one of the last of the elite-style protestmeetings in London (1890).

In England, as might be expected, the response from the Board of Deputies was at first muted. Increased numbers of Russian Jewish newcomers, most of whom were impoverished and unassimilated Ostjuden, had caused an anti-immigrant backlash in England (as evidenced by the Aliens Bill of 1905), and overt expressions of anti-Semitism began to be far more common. [Similar forces caused a corresponding increase in anti-Semitism in the United States during the early twentieth century.] Zionists were anxious to respond to the Russian atrocities, but they were deeply divided between two main groups: the English Zionist Federation, which included Messrs. Bentwich, Prag, and Gaster, and the Jewish Territorial Organization (ITO) headed by Israel Zangwill. In mid-November both entities held separate public meetings in London, which followed the general procedure established through the years, including the reading of statements from prominent Christians. The bitter antagonism between the Zionists and the ITO, however, overshadowed the very purpose of the proceedings, and any sense of unity and common purpose was greatly diminished.

In January 1906, after much delay, the Board of Deputies and the Anglo-Jewish Association finally relented to communal pressure and sponsored a public meeting “to express indignation and horror at the massacres.” Very much in the tradition of Mansion House, members of the Jewish and Christian establishment met at the magnificent Queen’s Hall in Central London and effectively revived the legacy of Judeo-Christian protests. Addresses by Lord Rothschild, the Bishop of Ripon, the Archbishop of Westminster, and others renewed a spirit of cooperation and indignation that was a constant hallmark of an earlier era. Myriad protests and memorial meetings, composed of both Jews and Christians, also took place throughout England, Wales, Scotland, and Ireland.

Atrocities increased during the chaotic period of the Russian Civil War—an especially tragic time for Ukrainian Jewry (1919–1921) and one that featured Cossacks as the primary perpetrators of violence. An accurate accounting of all the dead may never be known; estimates range from a low of 35,000 to a high mark of 200,000. As it happened, however, anti-Semitic atrocities in Poland reached the press well ahead of the Ukrainian devastation. Reports regarding Polish pogroms, coming at the end of World War I, touched off a virtual maelstrom of indignation in Britain and the United States. On 21 May 1919, hundreds of thousands marched in New York City and fifteen thousand eventually made their way to a protest rally at Madison Square Garden, where Charles Evans Hughes and Rabbi Stephen S. Wise delivered stirring orations. Virtually every large city in the Northeast and Midwest followed New York’s lead and held similar marches and protests. In England, a national “Day of Mourning” was observed on June 26, and a street march that met at Hyde Park was said to have attracted a crowd of 100,000. In November the horrors of the Ukrainian pogroms became known in the media, and this touched off yet another round of demonstrations in both the United Kingdom and the United States.

A new pattern had thus formed in the twentieth century: contentious displays were steadily moving away from elite control and now incorporated increasing numbers of middle- and working-class Jews, many of whom had direct ties to the scene of violence abroad or were themselves actual survivors of previous attacks. More often than not, American Jews reacted first to the crisis, but both the United States and Britain now included massive numbers of participants and were less inclined to adhere to formal procedure and stately venues than in the past.

This entry was posted in CS Monaco, Research and tagged campaigning, religion. Bookmark the permalink.