The following is an extract from Modern Women in China and Japan: Gender, Feminism and Global Modernity between the War, which was published by IB Taurus in February 2012 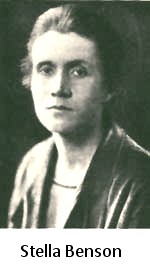 Stella Benson was born in England in 1892 and kept a daily diary from the age of nine. Her mother, Caroline Essex, was the sister of novelist Mary Cholmondeley. Benson’s own first literary success came with a poem submitted in 1905 to the St. Nicholas Magazine, a magazine for children published in New York. Other keen contributors – members of the ‘St Nicholas League’, who were issued with badges – included E. B. White, Edna St. Vincent Millay, William Faulkner and Vita Sackville-West. It is intriguing to note such a group of writers from Britain and the USA even at a young age being part of an international sphere, a junior version of the literary world of which they would later be members.

In her own life she had an unusual level of independence and freedom to make her own choices. In winter of 1913-14, her mother took her to the Caribbean in order to convalesce following a series of operations to improve her sinus conditions. This trip provided material for her first novel, I Pose (1915). Here she decided to try to be independent on their return to England, and live away from her family and work for suffrage causes (this was possibly due to a modest annuity from her mother’s family once she came of age). The financial success of I Pose cemented her career as a writer and she published regularly from that point. The novel is a curious romance between a gardener and a suffragette.

Benson’s writing on women reflects some of her own ambivalence and dissatisfaction with both women’s role in society and the gains of the suffragist movement.  In her 1917 novel, This is the End, she writes, ‘I canot introduce you to a heroine because I have never met one’.

From 1914 she had worked for the United Suffragists in London, and attended rallies. Her tasks involved general office work (addressing envelopes and arranging chairs at meetings), as well as, on one occasion, the bizarre job of following Sylvia Pankhurst and tracing her movements after she was released from prison. After war broke out, to her chagrin she was expected to sell Votes for Women on street corners rather than take an active role using her skills as a writer. The war also damaged her finances, its effect on shares reducing the annuity she received and making it necessary for her to work to retain independence from her family. So instead she joined the Charity Organisation Society, (COS), a group which, like the Salvation Army, aimed to improve the lot of the deserving poor of London’s slums.

The London COS was established in 1869. They drew on the ‘scientific’ principles to ‘expose the cunning of the slothful poor and help rectify their immorality’. Early committees focused on preventing begging and ‘impostors’. The objectives of the District Committees in 1913–14 included both ‘learning how to befriend persons in distress in the best way’ and ‘careful enquiry in all cases in order to test the truth of the applicants’ statements’. The COS represented the beginnings of what is now common practice of social work, with caseworkers monitoring recipients and reporting on their progress rather than just dispensing aid. As it was funded by subscriptions, there was also a strong focus on satisfying subscribers that their contributions were not being wasted. However, her experiences as a caseworker left her disillusioned with the mission and the bureaucracy of the organisation. The charity she satirised in her novel Living Alone was based on her experiences with the COS.

“But perception goes out of committees. The more committees you belong to, the less of ordinary life you will understand. When your daily round becomes nothing more than a daily round of committees you might as well be dead … Organising work consists of sitting in ’buses bound for remote quarters of London, and ringing the bells of people who are almost always found to be away for a fortnight.”

In June 1918, she left England for the USA and on arrival took several jobs before obtaining a post as tutor at the University of California at Berkeley and later as an editorial reader for the University Press. In 1920 she decided to return to England and undertook an eighteen-month journey via Asia, during which she worked in a mission school and a hospital. In China she met James Carew O’Gorman Anderson (known as Shaemas), a Customs officer, and they were married in London on 27 September 1921, exactly one year after they met. 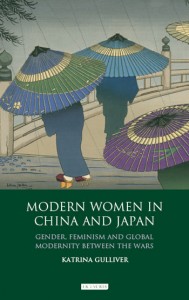 The Andersons’ honeymoon, which they spent crossing America in a Ford car, was described in Stella’s book The Little World (1925). Benson’s original plan was for her husband to find a job in California, possibly teaching Chinese at Berkeley, but when he was unable to find employment, they returned to China to live. Stella continued to write novels and stories most of which are now forgotten; her novels included Goodbye, stranger (1926), The man who missed the bus (1928) and Tobit transplanted (1930) which won the Femina Vie Heureuse Prize.

Her later involvement with work in Hong Kong to improve the rights of women was tempered by her impatience with the Church, when religious and missionary organisations had done significant work to improve women’s education. She was most passionate about ending the traffic of women in Hong Kong, while admitting that many of the women who were the subject of concerns about prostitution were not ‘trafficked’ but there by choice (a rational choice, in Benson’s view, given the limited range of options available to girls in rural China at that time). She wrote in her diary:

“I found myself upon a committee for enquiring into International Traffic in Women by order of the League of Nations … There are no licensed foreign prostitutes here, & none are known to be imported, but Chinese girls are brought from country districts in China, not by force as a rule but by smooth promises – and the government licenses them … after ascertaining that they really choose to live the prostitute’s life. Out of each dollar that a girl earns she pays 50 cents to the brothel mistress & 25 cents to her amah (who is often her procuress). It is very boil-blood-making to think that the government endorses this traffic by licensing it – but it is not, strictly speaking, relevant to the League of Nations purpose which is the International traffic… No lies are needed to lure girls from a prospect of working in sun & rain in stubborn fields, with always one baby on one’s back & another coming – to do all cooking, washing & scrubbing as well as field work by day & accede to husband’s demands by night – to a life of jewels and beautiful clothes & bright lights & caresses.”

Her comments about women’s status in China demonstrate the outrage of the suffragette for the subjection of women. She believed in social reform through legislation rather than the missionary focus on salvation for ‘fallen women’. Despite Benson’s anti-missionary (and more generally anti-Church) views, it was missionary schools that offered the first general education for girls in China, and through missionary influence – direct and indirect – created a generation of feminists in China who had been exposed to western social norms, including rights for women.

Benson is largely unknown to the reading public today, despite having been very popular in her time. Her status as a novelist did not survive after World War II. However, perhaps the fact that Benson’s novels are no longer widely read enables her to be seen as a writer distinctly of her time, rather than one of universal and timeless themes. She observed the situation for women in China and Britain and offered different assessments, based on her sense of social justice and equal rights.

Benson often indicated that she felt old while still a young woman, perhaps due to her regular illnesses, and caught pneumonia while accompanying Shaemas on a visit to Hongay in Tonkin. Stella Benson died in hospital on 6 December 1933 at Baie d’Along, near Haiphon. She is buried at French cemetery on the Île de Charbon, near Hongay.