At the beginning of this year (2012) a small group of oral historians kicked off OccupyOralHistory. We were inspired to do so by the broad movement that is occupying spaces that include not just the streets, former banks and places that used to be for education, but intellectual spaces as well. It is intended to be a transnational network, exchanging stories of resistance as well as how we think about and do oral history. Within four days of our first blog forty people from Greece, Turkey, Portugal, the United States, South Africa, Australia and Britain had expressed an interest in working together.  We would like to reach further. 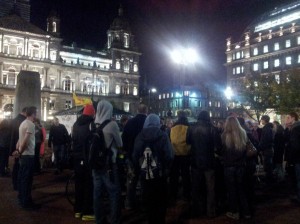 Camp meeting at Occupy Glasgow in October 2011: "If you want to be part of it, you have to participate." (Photo: GC Gosling)

The study of history has never been the sole preserve of professionals and always has been more than an academic concern. In Britain in the 1930s there were those who called themselves amateur historians and in more recent times identifying themselves as community historians. They have included those who rejected Ranke’s false objectivity and advanced radical approaches to interpreting the past. By the 1980s voluntary history activists, especially those working through the Workers’ Educational Association who were increasingly exploring labour and women’s history, and were being galvanised in the their efforts by the History Workshop movement.

Oral History in Britain has had a similar trajectory, creating relationships between community-based historians and college researchers. These relationships, reflected in the membership of the Oral History Society, have sometimes been less than comfortable, but have often been fruitful and creative in driving the development of oral history. The result has been an increasingly sophisticated understanding of the processes of remembering and forgetting. These insights into memory and narrative have also been matched by a growth in the collection and archiving of oral testimonies. We might now celebrate regular funding from major charities and research councils for the use of oral history in academic contexts, but in the last two decades millions of pounds have also been spent on volunteer-led oral history and reminiscence projects by the Heritage Lottery Fund within thousands of localities.

Oral history’s resurgence in the twentieth century began with a radical idea: that oral history is a means by which the voices of those who have been traditionally hidden from history will be heard. It seems particularly timely to return to this idea with the growing realisation that the 99 per cent are too often ignored. This is not a call for an uncritical return to a populist version of ‘history from below’ that fails to recognise the significance of historical forces, myth and remembering, but it is the reaffirmation that oral history can counteract the bigger lie that the 99 per cent are so powerless that their place in history does not matter and need not be remembered. The OccupyOralHistory project is imbued by an excitement that we might be able to promote an oral history that can help facilitate positive social change at an important juncture in our common history.

Amongst our group are those who want to assist in the recording and recovery of the oral histories of Occupy and allied protest movements around the world. By facilitating debate about the best ways of doing this, it is hoped that we will collectively develop new concepts in the undertaking of contemporary recording projects and movement building. I believe that this will include encouraging reflective practices that ask questions about the additional challenges of collective approaches to making history. Some of this is already emerging within the Occupy movement in terms of radical archivist practice (or ‘anarchvism’ as Jeremy Bold in New York has termed it), but there is much more to do. 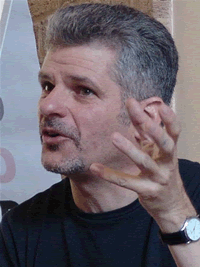 Dr Graham Smith is Chair of the Oral History Society

Those who are contacting us via our blog are making clear their openness to new ideas and this includes in thinking again about the practices of oral history. Already some of the standard approaches are being discussed. For example, ‘shared authority’, in which oral historians have sought to challenge hierarchal research relationships, is being actively debated. This therefore is a chance to re-examine the role and potential of oral history in a changing world; the status of oral history as a radical approach.

However, contributors to the OccupyOralHistory project also want to offer more pragmatic support including providing a contact point and a forum for exchanging ideas, knowledge and skills. Offers of training and demonstration projects are already being identified and publicised. We are also beginning to match voluntary oral historians with groups of Occupiers who might otherwise go unrecorded.

Our members are also concerned about the ways in which revolt in the past has been repackaged and either turned into style or damned by caricature. During this time, this third-wave of marketization, with individual states busy protecting volatile financial markets at the expense of looking after vulnerable citizens, labour will continue to be bought and sold, while nature and culture, including land, environment, bodies and memory, becomes ever more commodified.  It is the memory and history bits that OccupyOralHistory might help to defend.  So, we might not only be about rethinking oral history in terms of collection and archiving, but also how it is used. Early joiners have included not only experienced interviewers, but also documentary makers and authors therefore making the possibility of investigating (re)use more likely.

OccupyOralHistory members are also keen to help develop research into the history of occupation. We want to go ‘digging up old protest histories’, as one early volunteer has put it; to develop an understanding of the role of occupations in social and political change. Contextualising the role of occupation in past struggles may help us in documenting recent events, but it may also establish a dialogue between past and present activism: a retying of the knot of history and a way of reflecting on the lessons of past resistance that had become shrouded during the last economic boom – a boom we were told that would be without end.

We are only at the beginning of this project. We want to maintain and develop inclusive, non-hierarchical relationships (here we can learn from many of the Occupy movements). But already we realise that it takes time to organise and it needs people to step forward to help organise without expecting that their ideas will dominate as a result of their efforts. If you’ve contacted us and we’ve yet to respond please be patient – we are organising by delegating and asking people to help with these initial stages. In the meantime please think about contributing a comment on the blog. If you haven’t contacted us and are interested in helping to build OccupyOralHistory, what are you waiting for? 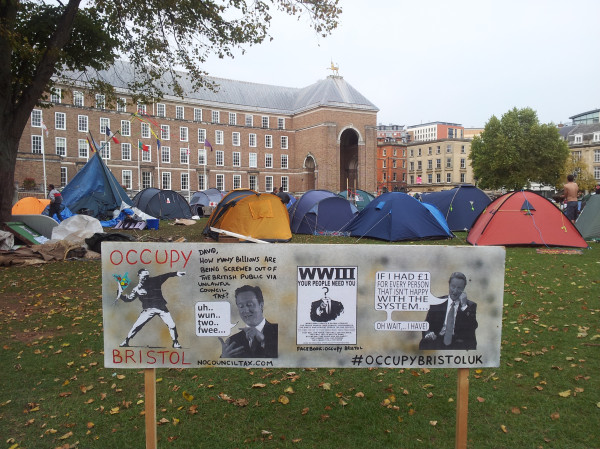 Occupy Bristol, which was served an eviction notice in January 2012 (Photo: GC Gosling)

You can find out more and get in touch by visiting the OccupyOralHistory project blog or on twitter: @OccupyOralHist

2 Responses to Occupy Oral History: Documenting History in the Making