Feature: Charity in the Georgian Era: Lessons for Today?

Andrew Rudd is a Lecturer in English Literature at the University of Exeter and has previously worked as the Parliamentary Manager at the Charity Commission. In this blog, he reflects on the lessons learned by researching the history of 18th-century charity.

What can the history of charity in the eighteenth century teach us today? This was the question I asked myself when I started working on my latest research project, a cultural history of charity as it is depicted in the literature and art of the Georgian period (1714–1830). And it was a personal question, because before I became a lecturer at the University of Exeter I worked as Parliamentary Manager at the Charity Commission, which oversaw the activities of the 160,000 charities in England and Wales day in, day out.

Looking at the mass of visual and printed material produced on the subject of charity during the 1700s, there were clearly resemblances between what people were concerned about then and what we are still debating today. To be sure, there were important differences. For instance, the Georgians had inherited the medieval tradition of almsgiving which the Henrician Reformation and subsequent Elizabethan legislation had effectively secularised.

The ‘New Poor Law’ (officially the Poor Law Amendment Act) of 1834 was designed to make provision for the poor fairer for society as a whole, although it was regularly accused of inflicting inhuman cruelty, as the novels of Charles Dickens and others were at pains to show. This system, which was intended to clear away the detritus of ages and which arguably paved the way for the modern welfare state, has caused us to forget the Georgian idea of charity which was much more ad hoc and more dependent on the generosity of private individuals.

With recent attempts to put charities back at the heart of service delivery and questions being asked once again about unevenness of provision and even the whims of individual benefactors, it is timely to revisit the Georgian system and establish exactly what characterised it and what lessons we can learn from it. The Voluntary Action History Society kindly invited me to present some of my early findings in December 2015 and the presentation benefitted from a thought-provoking discussion afterwards.

The gist of the presentation was as follows. I was struck by figures showing that charity plays more of a role in people’s lives today than ten years ago (40% of people in 2014 said that they, a friend or family member had had contact with a charity, compared to 10% in 2005) and that debates over the pros and cons of charity have reignited.

In the eighteenth century, people were divided about whether the upsurge of charitable activity was evidence of nationwide benevolence or the social fabric coming apart. The novelist Samuel Jackson Pratt regarded Britain’s charitable institutions such as the Foundling Hospital in London as the glory of the age. Dorothy and William Wordsworth, on the other hand, lamented the growing numbers of injured soldiers and sailors who were victims of the period’s almost continuous foreign wars.

The question of the psychology that lay behind acts of charity was also at the fore. Eighteenth-century novelists were fascinated by characters who performed good deeds because they wished to be seen doing so (Georgian virtue-signalling). Secret acts of charity, on the other hand, were a sign of incontestable virtue. 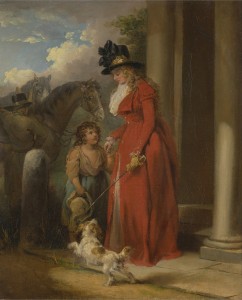 Writing in 1797, the reformer Joseph Townsend wrote ‘it is generally found, that modest worth stands at a distance, or draws nigh with faltering tongue and broken accents to tell an artless tale; whilst the most worthless are the most unreasonable in their expectations, and the most importunate in their solicitation for relief’. This reminds us that self-representation of those seeking charity is often regarded as suspect and givers are prone to be on guard against possible fraud.

William Wordsworth agonised over the difficulty of writing about personal deeds that, by their very nature, ought not to be displayed in public. In one of his best-known poems, ‘Lines written a Few Miles above Tintern Abbey’ (1798), he described the ‘best portion of a good man’s life’ as ‘his little, nameless, unremembered acts of kindness and of love’. Publicly feted acts of charity, such as those celebrated by Pratt, were from a moral perspective a contradiction in terms.

And yet, did any of that matter if money was raised and good work done as a result? One of the most compelling recurring features of the debate is the claim that charities somehow become less charitable the larger and more vocal they become. We see this in newspaper reports today about charities being too large or using aggressive fundraising techniques. Equally, charities that receive public money are accused of being too close to the state, an echo of Wordsworth’s view that true charity ought to be a wholly personal and not an official matter.

The Georgian era teaches us, finally, that despite repeated warnings not to give money to beggars in the street, for many the face-to-face, individual encounter remains at the mystical heart of what true charity means. Charity publicity tries to reproduce the effect in posters showing the faces of needy recipients whom the giver can imagine they are helping personally. The age of sensibility when the mental dynamics of sympathy and compassion were forged lies at the root at this enduring aspect of modern charity.

As my project progresses I hope to share more of my work with VAHS, but you can listen to the seminar from 14 December 2015 here.

This entry was posted in Features. Bookmark the permalink.