Oral Histories of Voluntary Action: Reflections on the Workshop

In this guest post, Bridget Lockyer reflects upon Oral Histories of Voluntary Action: An Interdisciplinary Workshop, a VAHS New Researchers event which took place this February in association with the University of York’s Humanities Research Centre.

Voluntary action history is a growing area of research and in the current political and economic climate, the history of the voluntary sector in the twentieth century has been pulled into focus.  Oral history methods can be one way of accessing these invaluable histories, yet many of those undertaking this type of research may not have the necessary skills or expertise to conduct interviews.  Oral Histories of Voluntary Action: An Interdisciplinary Workshop, which took place at the University of York on 7 February , aimed to remedy this and offer a space for new researchers to discuss the benefits and
challenges of using interview methods within their research and share solutions
for overcoming potential problems.

The workshop was organised by myself and Charlotte Clements (you can read her blog on the event here), both active members of the VAHS New Researchers committee.  The workshop was funded by the Humanities Research Centre at York.  We wanted the day, comprising of six papers and a roundtable session, to have a very relaxed and discursive atmosphere, which would allow plenty of time for discussion and debate. 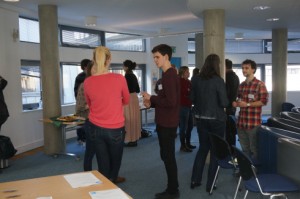 Presenting in the first panel was Charlotte Clements, David Ellis and Jessica Hammett.  Charlotte gave us her perspective as an historian conducting oral history interviews within a social sciences department.

This kicked off one of the central themes of the day: interdisciplinary boundaries. The workshop included researchers from history, politics, women’s studies, social sciences, law, archaeology as well as practitioners working in voluntary organisations.  Why and how did our approaches to interviewing differ and how important was this?

Charlotte also raised the issue of why researchers choose interviews.  For her, it was because she is researching small local youth clubs where records are minimal and poorly catalogued, so it is necessary to talk to the people involved.  But she argued that the choice to interview can sometimes be too automatic, too expected, particularly as a historian or sociologist studying the recent past.

David Ellis discussed this concern during his presentation.  He had conducted interviews as part of his research on the history of community action in urban Britain.  For him, interviews were a way to ‘compensate for the inadequacies of the historical record’.  But he did encounter problems: had he interviewed the right people and could he reach the real grass-roots activists?  There was also the issue of continuity as he had interviewed living sources who were using current debates and political climate to reflect on their past experience.  A remark of David’s which particularly chimed with me was that the distinction between documents and oral history can be overemphasised; they are often presented to a researcher at the same time and inform each other.

Jessica Hammett, whose work focuses on memory of Second World War era Civil Defence focused on the re-use of oral history interviews, analysed an extract of an interview with a woman ambulance driver.  This close analysis was very revealing, suggesting how this woman felt about her (sometimes controversial) work.  Jessica reminded us that it is not necessary to conduct new interviews; there are hundreds of oral history interviews in archives and undertaking new analysis of existing interviews can reveal different details and themes.  You do not have to have been the one asking the questions for interviews to be meaningful.

In the second panel were Susanne Martikke, Katrina Foxton and Lucy Binch.  Susanne, who works for the Greater Manchester Centre for Voluntary Organisations, discussed how the context of the interview, who you are doing it for and why, affects the process.  In a voluntary sector context her interviews were ‘quick and dirty’ with swift outcomes, whereas the interviews she conducted as part of collaborative project with universities had to be more comprehensive and take more time.  She talked about these difference in terms of ‘trade-offs’.  For example, having recording equipment (instead of making notes) means that you can be more focused  on listening and responding to the person you are interviewing, but this does mean you are left with masses of data and it is more difficult to extract information and produce an output.

Katrina Foxton described her experiences as a volunteer working on a Heritage Lottery Fund oral history project in Windsor.  She examined her transition from volunteer to oral history researcher and how this changed her approach to interviewing.  Katrina discussed the issue of remaining ‘neutral’ when you do not agree with the person being interviewed.  She also asked how interviewers can maintain boundaries in certain situations, such as when interviewing elderly people in need of support.

Lucy Binch, whose research centres on sex workers in the UK and how they manage their everyday identities with the challenges of their working lives, discussed how she was able to use her volunteer status within a voluntary organisation to interview female and male sex workers.  Volunteering for this organisation meant she was able to access these difficult-to-reach, marginalised groups, and meant that she was more likely to be trusted.  Lucy also brought up the issue of showing emotion during the interviews, as her participants had related very traumatic events.  Lucy asked how much she should follow her instincts and respond sympathetically, or maintain ‘professionalism’.

The day finished with a roundtable led by Paul Ward, Anjelica Finnegan, John Mc Loughlin and Geoffrey Wall, with a written contribution from Beth Breeze.

The panel summarised some of the issues we had been discussing during the day: discipline distinctions, neutrality, emotion and empathy, insider/outsider status and co-production.  We did not solve all of the issues raised, but were able to talk through them, recognise that others faced similar problems and review our different approaches.  Some of the practicalities of interviewing were discussed, such as how to signal the end of an interview and how to get hold of busy interviewees.  The roundtable was a great way to end the day, bringing together the central themes and offering time to reflect on the presentations.

The feedback from the workshop was overwhelmingly positive.  There were some people attending who were about to undertake interviewing for the first time and who suggested that the workshop had allowed them to think more deeply about the choices and approaches they might take.  Others who had already conducted interviews within different contexts appreciated the space to raise some of the methodological and ethical issues they had already encountered.  For me personally, it was a chance to reflect on the interviews I had already done and think about how I could amend my practices in the future, reminding me to always make informed and proactive methodological decisions.

This post was originally published on Bridget’s blog: http://bridgetlockyer.wordpress.com/