For our May feature, Carmen Mangion reports back for us from an academic conference in Germany on the history of deaconesses, religious women who were part of a transnational movement at the heart of nineteenth-century care and provision for the poor.

The usefulness of deaconesses as care-takers in all kinds of hospital and homes for the aged, and asylums of every description, is so apparent that it does not need to be dwelt upon… Doubtless at the present time the deaconess who will answer to the greatest number of immediate wants is the “parish-deaconess,” or the home mission deaconess, as we may call her. Her usefulness has been well tested in the great cities of Germany, France, and England, as we have seen. Perhaps nowhere is her work better appreciated than in London, the greatest city of modern times.

Nowadays, the term ‘deaconess’ is less well-known but as this quote written by American Methodist and ardent deaconess promoter Jane M. Bancroft Robinson (1847-1932) in her Deaconesses in Europe and their Lessons for America (1890) suggests, deaconesses were important contributors to voluntary action in the nineteenth century. Bancroft’s book introduced the American reading public to European deaconesses and pointed to them as a truly transnational model of voluntary action.  They were Christian women workers whose aim at its core was religious but who also met the needs of the poor through providing for the body: food, clothing, medical care and education. 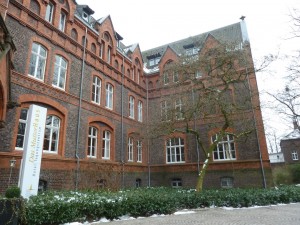 A few weeks ago I spent a rather cold and snowy few days comfortably ensconced at the fittingly named Hotel Mutterhaus in Kaiserswerth, Germany.  The Hotel, renovated about ten years ago, had opened in 1903 as the motherhouse of the Kaiserswerth Deaconesses, the first and arguable the most influential deaconess institution in the modern deaconess movement.  I was attending a conference ‘Deaconesses in Nursing Care: International Transfer of a Female Model of Life and Work in the 19th and 20th Century’ organised by Susanne Kreutzer and Karen Nolte.  They brought together scholars from Europe and North America who studied deaconesses in Germany, Denmark, Finland, Sweden, Norway, Jerusalem, the USA and of course Britain.   Deaconesses were essentially female church workers typically trained in a deaconess community who worked with the clergy of a parish or in an (often) deaconess-run institution such as a hospital or school.  Some deaconesses lived in community, thus the mutterhaus was a place to which they could return if they became ill or retired, and others worked independent of community support.

The Kaiserswerth Deaconesses founded in 1836 by Theodor and Friederike Fliedner, a Lutheran pastor and his wife, became a model for other deaconesses nationally and internationally.  It became known as ‘a school for leading philanthropists’ and both Elizabeth Fry, the celebrated prison reformer and Florence Nightingale trained at Kaiserswerth.  In England, the Kaiserswerth model of women’s work and ministry inspired twenty-four separate deaconess institutions, 16 Anglican, 4 Methodist, 1 Baptist, 1 Lutheran and two Protestant evangelical.  The numbers of British women who entered these institutions were never large, and it’s almost impossible to calculate complete communities given most deaconesses records seem to have disappeared.  They were involved mostly in parish work, although they managed the nursing in twenty-six hospitals in England including the German Hospital, the Evangelical Protestant Deaconesses Institute and Training Hospital (later becoming the Prince of Wales Hospital) and Mildmay Mission Hospital. 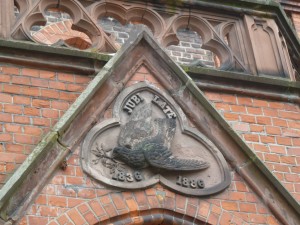 The deaconess movement crossed national boundaries with apparent fluidity.  This makes them a perfect subject for transnational history – we can examine, as George Gosling and Melanie Oppenheimer have noted, ‘the broad flow and circulation of movements and ideals as well as chart the biographies of individuals and societies through a range of historical formats and theoretical paradigms’.

The most documented of the English deaconess communities, the North London Deaconess Institution, was founded in 1862 by Elizabeth Ferard, who was the first Anglican deaconess ‘set apart’ in England.  They had strong links with Kaiserswerth.  Ferard trained for three months in Kaiserswerth and attended the 1861 and the 1865 Kaiserswerth Conference.  In the early years of the foundation, Fliedner sent ‘a highly gifted and thoroughly skilled Deaconess to help temporarily in hospital work’.  The link to Kaiserswerth was frequently lauded in published reports; the author of the 1868 annual report reminded readers that the institute was ‘founded upon the model of Kaiserswerth, and adapted to the Church of England’. This reference to adaptation was incredibly important, as contemporaries continually noted that deaconess life, though associated with Kaiserswerth, was always represented as an English institution, shaped by the circumstances of the Church of England. 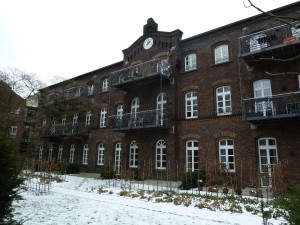 As many of us are not polyglots, the conference, graciously held in English, really pointed to a way forward for coordinated research on the deaconess movement.  Both paper-givers and attendees found similarities and dissimilarities in deaconess practice and authority.  The deaconesses in each locale offered a direct response to mostly the poverty of urbanisation and industrialisation, but sometimes, as in the case of some Scandinavian countries, the lack of services in rural outposts.  In some places, such as Finland, deaconesses became attached to the state as public health nurses, though in most places, deaconesses worked independently in church parishes or in communities in schools or hospitals.  Some communities, such as one in Denmark, were women-managed and very independent of clerical control, where others were managed by male pastors. 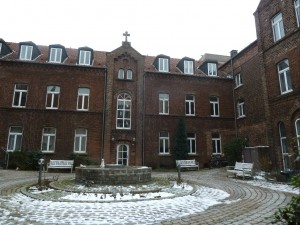 What struck me most though, in my own research and that of my co-presenters, was the network of cross-national and cross-cultural influences. I have been considering Thomas Adam’s ideas on ‘intercultural transfer’ with regards to the deaconesses.  In transferring the deaconess concept to England, there was a sense of borrowing the core objectives and meanings of deaconesses, but allowing for differences due to national and denominational identity. How much these transfers went both ways is difficult to ascertain, but there was plenty of travel back and forth by all parties.  And as the conference made clear, deaconesses’ institutions in the USA were different from those in Jerusalem and Sweden and Norway, etc.  This form of intercultural transfer did not lead to uniformity, but a sensitive nuancing of practices point to an interconnectedness that goes beyond national boundaries.

The conference brought up more questions than answers with regards to this idea of intercultural transfer – but the exchange of ideas was definitely relevant.  Importantly, despite a male headship, the main actors in this form of voluntary action were women.  Women travelled back and forth, as volunteers, visitors, as teachers, as leaders; they celebrated and shared their experiences; they worked to relieve the needs of the poor.  The deaconesses were central to the exchange of knowledge and experience of voluntary action.

For some documents from the archives of Anglican deaconesses see Henrietta Blackmore (ed.), The Beginning of Women’s Ministry: The Revival of the Deaconesses in the 19th-Century Church of England (Woodbridge, 2007).