The special launch screening of Director Ken Loach’s new film “Spirit of ‘45” was sold out at my local cinema, but this weekend I eventually made it along to watch this documentary charting the creation of the British welfare state.  The film is described by the Director as “an impassioned documentary about how the spirit of unity which buoyed Britain during the war years carried through to create a vision of a fairer, united society.”  It draws on historical film archives combined with contemporary interviews to examine key post-war social policies to nationalise public services and create a National Health Service as well as demonstrating their profound impact on peoples’ lives.

Particularly fascinating are a number of interviews with patients and professionals reflecting on their memories of the period and the contrast between living conditions before and after the creation of the NHS.  One gentleman recalls the slum housing conditions of his childhood, and a former doctor remembers with pride the first day of the NHS when he was able to attend to sick patients who could not have otherwise afforded the cost of a doctor’s visit and the necessary medicine.  Such personal accounts alongside archive film footage really drive home the difficulties of working-class life before the existence of the National Health Service. 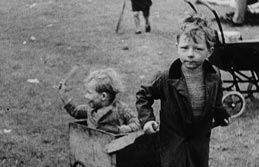 Spirit of ‘45 provides an engaging overview of social history from the 1930s to present.  VAHS blog readers may be disappointed by its relative neglect of charitable contributions to welfare both pre- and post-welfare state, although brief reference is made to the role of hospital contributory schemes and the pre-war voluntary hospitals that were later appropriated by the emerging NHS.  Rather, the film’s central focus is the changing role of the State in the provision of welfare services and public utilities.  Shot primarily in black and white, the film has a distinctly nostalgic feel and succeeds in capturing a sense of pride and achievement in the creation of the welfare state (imagine, for instance, the historic moment when a leaflet explaining how the NHS would operate landed on every doormat). 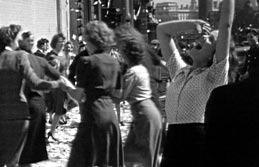 After its journey though the early years of the welfare state, the documentary  jumps ahead to the Thatcher era and the welfare retrenchment policies of the 1980s.  Here, footage of police brutality during the Miners’ Strike and coverage of the privatisation of a range of public utilities and services (right up to current attacks on the NHS) inevitably make for gloomier viewing.  Despite this, it is clear that Spirit of ’45 is intended to inspire its audience, and act as a call to action for those concerned about current policy directions and the future of public services.  In the closing minutes, one participant urges older people who grew up with the benefits of the welfare state in its heyday to talk to the younger generation about what its loss would represent – a powerful reminder of the importance of understanding and remembering our social history and of its contemporary relevance.

Have you watched Spirit of ’45?  How well do you think the film captures the history of the rise and decline of the welfare state? Did you find it depressing or inspiring?