The internet is a wonderful thing. You should know. You’re reading it.

For disabled people it can be a liberating tool, allowing those with restricted mobility the opportunity to interact with the world in a way unthinkable even twenty years ago. Of course, it also provides new challenges, such as how to make websites accessible to those with sight impairments; or how to move away from reliance on the written word for those who find reading and writing difficult or impossible.

For a sub-section of disabled people, however, this new form of interaction also allows for new forms of cooperation. Following in the footsteps of the New Social Movements in the 1960s, disabled people are meeting in cyberspace to share their experiences of being disabled, and forming new groups to stand up for their interests.

The most striking example of this must be the Spartacus Report – a survey of 523 responses to questions about the coalition government’s reforms to disability policy.

Published in January 2012 under the title Responsible Reform, it was fully researched and written by disabled people themselves, conducted over social media and e-mail, and therefore required very little funding. Other than, of course, the internet connections, computers and the efforts of those involved. 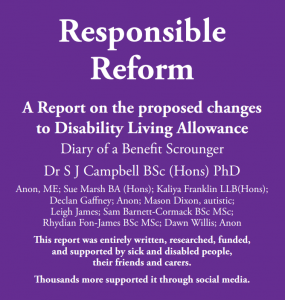 “The Spartacus Report”, or Responsible Reform is available through the WeAreSpartacus website.

This poses some challenges to us as historians, and to the group themselves. On the one hand, this is a very effective and rapid means of research and communication. By sharing the report on the internet, billions have access to the information and methodology contained within the report. This could create new possibilities for voluntary action as people can coordinate their political action across international borders without leaving their own bedrooms.

On the other, there is a danger that these reports will be seen as “inferior” the their glossy, professional counterparts. Despite the praise Spartacus has received from many quarters, the government claimed that the report was unscientific and unrepresentative. A sample size of 523 organisations is impressive enough for an amateur – a comment on the researchers’ salaries, not abilities – research group, but it pales in comparison to the large-scale survey the government can commission.

Still, it must be made clear that the responses came from the government’s own survey of disability organisations, with their responses gleaned from a Freedom of Information Request. While the methodology may have been criticised, the campaigners were working from much the same data available to the DWP.

For now, it seems, cyberspace-based activism needs to build its credibility. Yet a new, brasher form of voluntary action had to gain credibility in the 1960s and succeeded. The major disability lobbying organisations today have their roots in the “Poverty Lobby” and New Social Movement organisations of 40-50 years ago.

Is this a new form of voluntary action? Or is technology putting a new spin on an old concept?

Responsible Reform, also known as “The Spartacus Report” is available through the We Are Spartacus website.

Short disclaimer: since writing this post, I have been involved in a minor way in “fact checking” and research into disability benefit issues with people from the Spartacus group.

EDIT – 18 February 2013, 15:12 – a previous version of this post said that the responses to the survey had been solicited by the Spartacus Group. In fact they had been obtained by the group after a Freedom of Information request asking for the responses to an official DWP survey. The author apologises for the mistake.