How many organisations – in the non-profit sector, and beyond – have a firm grip on their history and its significance for them? How many of them know how they have impacted society over the years, can show the twists and turns of their development, and use their unique past to inform and inspire their future direction?

People & Planet, a charity that supports student campaigning across the UK, is a good example of an organisation that has prioritised ‘doing things now’, rather than dedicating time and money to analyse its place in history. Dynamic, fast-paced, ambitious and over-stretched, like most charities P&P has had to let Past take a back seat in preference of Present and Future. 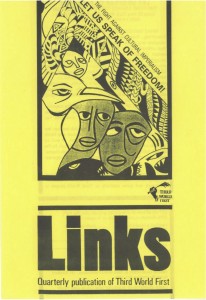 When I first visited the People & Planet archive at their national HQ in Oxford, it did not look promising. Tucked up in the eaves of their attic-level office, the ‘archive’ was in fact a boxroom-cum-cupboard, heaving with glorious mess. Megaphones, poster paint, tents, Frisbees and Divine chocolate lay strewn in amongst piles of Be the Change and a random collection of A5-sized Sebastiao Salgado prints. There were Pants to Poverty underpants heaped amongst stacks of brown envelopes and tins of soup. The archive, what was visible of it, consisted of crumbling cardboard boxes and dusty files, vaguely labelled as ‘Campaigns’ or ‘General Archive’. It took a couple of hours to extricate this treasure trove of historical materials from the stash of campaigning tools for the present day.

The documents to be found there are of interest not just to historians, and the charity itself, but also to the student activism sector as a whole. People & Planet has been in existence since 1969, formerly known as Third World First. The archive covers its development from an idealistic student initiative born in the last gasp of the 1960s, through to its current guise as a team of 16 staff campaigning on environmental and human rights issues, working with University students and school pupils to raise awareness and increase action. In the records of its activities, you can trace the changing focus of UK campaigning in the past four decades, and the evolving attitudes towards the wider world that went with it.

The early campaigns were very much about people – in the ‘Third World’, but also in the UK. With an achievement that seems extraordinary now, in the course of 18 months the six student founders and others who joined the campaign managed to raise approximately £120,000 – over £3m in today’s money – through persuading 10% of the UK student population to donate a monthly subscription, which was given to international development charities including the then small Oxford-based charity, Oxfam. The students also wanted to emphasise the importance of educating young people in the UK about ‘third world’ issues and dedicated significant time and resources to researching and creating information packs on various topics. They organised overseas expeditions for young UK leaders to experience conditions in North and East Africa themselves and to educate their peers about development issues on their return. 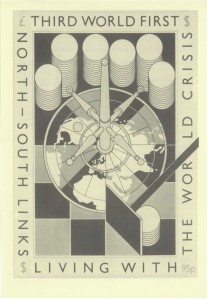 The language and tone used in these early documents seems dated now, but there’s no doubting the passion and ambition of the young people who organised and publicised, travelled and donated, because they wanted to do something positive for the world. And this underlying attitude remains obvious in the archive’s contents from 1969, right through the charity’s move towards more environmental campaigns in the 1990s, until the most recent sections added last month. There is an optimism bubbling in these documents, the publicity materials are bright and bold, the photos show enthusiasm and excitement. This, then, is one reason why the archive is so important for People & Planet today: it gives the charity character and is a visual representation of their values and attitude. There are numerous examples on this website of charities which have used their archives in this way, to create a shared feeling of belonging to something special amongst their staff, trustees, volunteers and beneficiaries.

A more concrete use for the archive lies in impact measurement. In this case its significance extends beyond P&P to other organisations in the student activism sector, including the one I work for, Student Hubs. We work with students not just because their fundraising, campaigning and volunteering activities have an impact now, but because by supporting their passions and ambitions they will go on to have a much greater impact over the course of their lives. People & Planet ‘graduates’ have founded new initiatives, fought and won campaigns, and taken the values of the charity with them through their professional and personal lives. The archive gives a tantalising glimpse of the experiences that have educated and motivated them to do so.

Knowing this – and having the opportunity to demonstrate P&P’s impact on individuals as well as society – brings history alive, and makes the charity’s past relevant to their future. As for the archive, my excavations are just the start of what will hopefully become a longer process of preserving the collection, so that it can be made available for researchers to investigate just how significant student activism has been to our society and history.

This entry was posted in Archives and tagged campaigning, education, environment, international development. Bookmark the permalink.