Scandinavian Housing and Britain’s ‘New’ Co-Operatives in the 1960s

The following is an edited extract from Glen O’Hara, Governing Post-War Britain: Paradoxes of Progress, 1951-1973, which was published this month by Palgrave Macmillan. 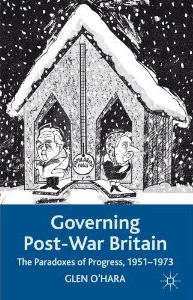 International policy transfer can be seen in many areas of British social administration in the post-war era. One of these is social housing. Sweden’s housing policies were thought to be particularly attractive in terms of industrialised building, partly because Stockholm had long led the way in standardisation and efficiency. Interest in Scandinavian housing was a constant theme in private policy discussions. But in the early 1960s this pervasive esteem coalesced into something more – literally – concrete, as Ministers and officials found one answer to Britain’s pervasive housing shortages in the Scandinavian co-operative movement.

This was yet another middle way solution with attractions similar to Shonfield’s enthusiasm for state-supervised but privately-run corporations. Government White Papers at the time were quite explicit about this, referring to ‘the “joint ownership” housing associations which have been so successful in Scandinavia’. Following these White Papers, £28m was provided for ‘pump-priming’ operations under the 1961 Housing Act, and £100m for a new Housing Corporation, set up to encourage these developments, in 1964. Two types of co-operative housing were provided for in the 1961 Act:

Academic, political and media attention had been focussed on just this solution for some time. The late 1950s and early 1960s saw pamphlets and reports praising housing co-operatives the Fabian Rosalie Alford, the Co-Operative Party, the London School of Economics academic John Greve, as well as Lewis Waddilove, the Director of the Joseph Rowntree Trust who was extremely well-connected in the housing policy community, and the UN. They did only praise the Swedish schemes, but also those of Denmark and Norway. However, Sweden was most commonly cited. For example, in the UN’s 1959 housebuilding report, which noted that more than one-third of Swedish building was being conducted by not-for-profit societies, linking their large-scale effort to Sweden’s relatively rapid adoption of standardised building techniques.

The Central Housing Advisory Committee (CHAC), set up to advise the Minister of Housing in the mid-1930s, was one settled institutional arena through which these ideas were communicated. Here Lewis Waddilove, along with other influential members of CHAC including Sir Parker Morris from the National Federation of Housing Societies, expressed their concern that ‘private enterprise building is concentrated almost exclusively on building to sell, and so does not meet the needs of those who can afford an unsubsidised rent, but have no wish to buy’.

The response was the creation of a Ministry of Housing working party on buildings to let, which recommended the creation of a new type of not-for-profit ‘housing trusts’. A number of its members had been to Norway and Sweden to look into this idea during August and September 1958. Waddilove, Coventry’s City Treasurer A.H. Marshall, and two Ministry civil servants submitted a long memorandum on this subject to CHAC on their return. They praised those countries’ ‘valuable third partner’, which provided for tenants who ‘are unwilling to face the full responsibility of home ownership… who up to now have not looked beyond rented accommodation… these advantages are highly regarded in Scandinavia and should be equally welcomed here’.

This scheme was not, however, designed to play the same role as Scandinavian co-operatives. This was due, in part, to the fact that politicians never intended it to. The entire rationale was to encourage more private renting, rather than to develop the type of large-scale co-operatives that the Government enthused about in public. The 1963 White Paper setting up the Housing Corporation was quite clear about this:

Since the war there has been almost no building to let other than by public authorities. Fear of rent control, and of the problems associated with management, maintenance and repair, has discouraged private investment. The result is a gap in housing provision; and this the Government intend to see filled.

In private, Ministers were even more aggressively ideological. Housing Minister Keith Joseph and Scottish Secretary Michael Noble told the Cabinet in 1963 that the main problem with the housing market was that private investors were difficult to find. Furthermore, they argued:

The main reason for this is the Opposition’s declared intention to reimpose rent control. This has done much to undermine confidence… Given this situation, either we have to accept it, thus letting our policy be dictated by the Opposition, or find some means of remedying it. And that is what our proposals do.

The Conservatives had been very badly damaged by the political repercussions of their attempt to decontrol rents fixed, in some cases, since the Second World War. Ministers were searching urgently for a way of encouraging housebuilding without further attacking rent controls, or returning to the general council house building that Labour had always advocated. They were not interested in any attempt to embed co-operative societies in the British housing system, but rather Joseph suggested the transfer of bad housing to housing societies as a way to reclaim the issue from Labour. When the Chancellor, Reginald Maudling, refused to contemplate tax concessions, Joseph told him angrily that ‘you cannot want to contemplate an endless vista of extending municipal ownership any more than I. But that is what we do contemplate if we cannot set up an alternative’.

For more on the spread of ideas about housing in the past, see our blog article by Dr Thomas Adam: Intercultural Transfer and the History of Social Housing