A Mission Christmas in Uganda

England has a history of Christmas charity dating back to the Middle Ages, and peaking in the late Victorian era.  When British missionaries and colonial families went abroad, they took with them these same charitable impulses and Christmas festivities.  For the Anglican Church Missionary Society (CMS) missionaries who ran the Lake Bunyonyi Leprosy Settlement in Uganda in the 1930s and 1940s, Christmas was the biggest event of the year, and its celebration brought people in Uganda and Britain together.

‘Non-infected children of lepers about to pull gifts out of their Christmas pie’, Ruanda Notes, 85 (1944)

The Lake Bunyonyi Leprosy Settlement was founded on an island in Lake Bunyonyi of southwestern Uganda in 1931, by two CMS Ruanda Mission doctors.  By the late 1930s, it housed more than 600 leprosy patients, 100 healthy staff and family members, two female CMS missionaries, and one visiting CMS doctor.

Annual Christmas celebrations began with the preparation of gifts for all of the island’s leprosy patients: an endeavour that relied upon the missionaries’ success in soliciting gifts and materials from donors in England.  As the missionary Miss Langley wrote:

We are now in the middle of preparations for Christmas…  Six hundred to provide bags, gifts, soap, etc., for, is no light occupation, beside opening up the parcels and writing “Thank-you” letters to the kinds doners [sic].  May I take this opportunity of thanking you all for your generous gifts.  We shall be able to give a piece of soap to everyone and we have faith, that when next week’s parcels arrive, a gift as well.  (‘Miss Langley’s Letter’, Ruanda Notes, 59, Jan 1937, p. 23)

Gifts of soap, clothing, toys, and more went from England to Africa to the remote Lake Bunyonyi settlement, where they were unwrapped and placed into individual cretonne bags bearing the name of each patient who would receive them.  On the afternoon of Christmas Eve, all the patients gathered together and received their presents, and every year the missionaries sent pictures, written accounts, and personalised thank-you letters back to the donors in England who made the festive celebrations possible. 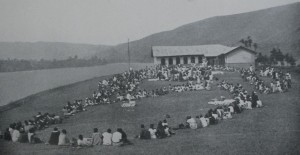 Alongside the preparation of gifts, missionaries, staff members, and leprosy patients worked hand in hand to create decorations for the hospital wards and schools, creating their own decorations with resources found in Uganda, and calling on friends in England for further gifts.

Miss Langley is a genius at making the most lovely paper flowers, and I learnt to make some, too, under her guidance, so between us we turned out a great number.  Then the hospital boys got great loads of beautiful papyrus grass and nailed it all round the walls of the wards, and the children did the same in school.  The paper flowers were pinned on to the grass and the effect was altogether delightful.  But the lepers were delighted most of all with the animals painted and cut out of cardboard that we looped on wire from the ceiling across the wards.  There were monkeys and elephants and all kinds of animals they knew, and they were simply thrilled.  They were given to Miss Langley by a Sister who had them in her ward in England the previous Christmas. (‘Miss Bryson writes of Christmas on Lake Bunyonyi’, Ruanda Notes, 56 April 1936, pp. 22-23)

On Christmas morning, Christian congregations from around the lake travelled to the island, joining all of the leprosy patients who gathered for the Christmas morning service, often held on the football field because there were too many hundreds of attendees to fit into the settlement’s largest building.  Christmas hymns were sung, the Word and Gospel message were read, and the nativity story was told.

In the grand tradition of Christmas feasting, then followed the aspect of Christmas most highly anticipated by all of the leprosy patients: the Christmas feast.  Unlike Christmas gifts and decorations, which relied upon the generosity of donors in England, the Christmas feast was provided by donors within Uganda.  Every year throughout the 1930s, a former missionary of the Lake Bunyonyi settlement sent 100 pounds of salt for the patients to enjoy with their meal: a rare and special treat.

Following in the English tradition of the Lord Mayor’s wife providing special Christmas charity, in the 1940s, the Ugandan Governor’s wife, Lady Hall, established a Leper’s Fund.  The primary activity of the Leper’s Fund was supplementing the donations received by British donors and Ugandan local governments, making sure that each patient living in a Ugandan leprosy settlement received a Christmas gift, and partook of a great feast in which enough cows were slaughtered that everyone could eat beef: another special treat.

Christmas celebrations spilled over onto Boxing Day, which was especially geared towards the settlement’s children.  They ran races, played football, and participated in all kinds of other games, and in the evening, they put on a concert.  The children practiced songs and mimicry for weeks ahead of time, and as Miss Langley wrote: ‘They are very clever mimics and take us all…to our advantage and disadvantage’.  (‘Letter from Miss Langley’, Ruanda Notes, 60, April 1937, p. 14)

Christmas was a special time for giving and receiving charity, not only in Britain (see Armstrong 2010), but also in its colonies. At Lake Bunyonyi, Christmas was an opportunity for missionaries and British donors to become involved in a part of the civilizing mission: the encouragement of Christianity and British festive customs.  For Ugandan leprosy patients, Christmas was an opportunity to take advantage and enjoyment, through partaking in diverse entertainments and accumulate some material benefits.  Christmas was a sentimental, exciting, and ‘civilised’ time, which brought British and Ugandan communities together.