A New Campaign for Charity Archives

We cannot write the history of Britain without recourse to the records of voluntary organisations. Some might argue this is only the case with pre-1945 history, and indeed the pre-war story of education, religion, health, housing and welfare cannot be told without an understanding of the voluntary sector’s contribution. However, with increasing blurring of the boundaries between sectors – such as the contracting-out of public services to voluntary organisations – future historians of twenty-first century social policy will face challenges because of inadequate legal protection for voluntary sector archives today. 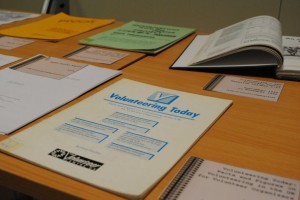 These concerns, together with recent stories of the loss and destruction of the records of voluntary organisations, have led the Voluntary Action History Society to launch a new campaign aimed at raising awareness of the situation. In two pieces this July, for this blog and Third Sector magazine, Georgina Brewis outlined the Voluntary Action History Society’s longstanding interest in archives and made an appeal for different sectors to work together on the issue.

In October the first meeting of a new action group formed as a result of this appeal was hosted by the British Library. The group brought together colleagues from national charities the Red Cross and the Children’s Society, trusts and foundations including The Diana, Princess of Wales Memorial Fund and Barrow Cadbury Trust, together with academics, librarians and archivists from a range of bodies including the British Library, The National Archives, London School of Economics, British Records Association and the Charity Archives and Records Management group.

One perhaps unforeseen result of the decision to include universities in the list of public authorities covered by the Freedom of Information Act 2000 was that it led to enhanced investment in the management of higher education records with resultant benefits for the historical archive. But what are the legal drivers in the charity sector? In the past the Historical Manuscripts Commission (HMC) provided advice on private archives and Public Record Office housed the records of central government. In 2003 these two organisations merged to become The National Archives (TNA), which as of October 2011 has new responsibilities as the lead body in the archive sector. It remains to be seen what impact, if any, this will have on voluntary sector archives.

The British Library meeting revealed that a number of positive steps are being taken. The National Archives has four advisors on private records (the function previously carried out by HMC), who are available to advise charities and voluntary organisations and are developing new guidance for small organisations. As yet, however, charity archives are under-represented in the National Register of Archives and staff members are concerned that charities should be helped to provide for their archives and make them accessible.

At the Diana, Princess of Wales Memorial Fund, Head of Research Andrew Cooper and trustee Diana Leat have been working to secure a permanent home for the organisation’s archive as well as to lobby for a European equivalent to the Rockerfeller Archive Center. The Fund has recently produced a valuable report mapping Trust and Foundation Archives provision in England. The Charity Archives and Records Management group (CHARM), an affiliate of the Archives and Records Association Section for Specialist Repositories, has just produced a draft strategy on charity archives, on which it is seeking feedback.

The group has enlisted the support of the National Council for Voluntary Organisations (NCVO). Karl Wilding, Head of Research at NCVO, notes:

Preserving the records of our organisations is probably not a priority for many of us, but it’s these materials that offer the historians of tomorrow real insight into what shaped the voluntary sector of today. I think we would all benefit from learning more about the archiving process – and in particular the cost and time involved.

Despite this progress, it is clear that there is significant work to do to get our message through to leaders within the charity sector and to regulatory bodies such as the Charity Commission and the Information Commission. We will be inviting these groups to attend future meetings of the group and are looking to link up with others concerned about the crisis in charity archives.

If you would like to find out more please see the Archives page of this website or email g.brewis@ioe.ac.uk

1 Response to A New Campaign for Charity Archives