The Dutch town of Haarlem receives far fewer foreign visitors than Amsterdam, just twenty minutes away by train, but is well worth a visit. Its well-preserved old centre witnessed the past glories of the Dutch Golden Age and, with its grand Saint Bavo church and prominent Town Hall on the Great Market, still exudes a medieval atmosphere, quite unlike the capital. 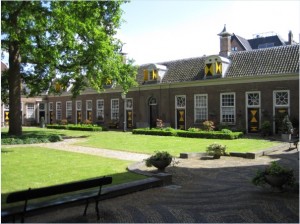 Historically Haarlem has boasted a great many charitable institutions, some of which are still visible. For example, the Frans Hals Museum, built in 1606 for the explicit purpose of housing Haarlem’s elderly men (the Oudemannenhuis or Old Men’s Home), is amongst a great number of well-preserved almshouses for the elderly. Throughout its history, 54 almshouses were founded in Haarlem, eighteen of which have survived until the present day. Though much has changed over the centuries, most of those surviving are still committed to providing cheap accommodation for elderly ladies of modest means. All of them are built around pleasant courtyards, and many are open to the public during the day.

Their presence was one of the reasons for hosting the first international, comparative conference on the history of almshouses (7-9 September 2011) in Haarlem. Almshouses have rarely been studied in their own right, let alone been the subject of a conference, but in recent years almshouses have themselves become a subject of enquiry thanks to, among others, the English Almshouse Project at the University of Hertfordshire and the Giving in the Golden Age project at the International Institute of Social History in Amsterdam. However, almshouses were not just a feature of the English and Dutch charitable landscapes, but could also be found in other countries. A session devoted to almshouses at the 8th European Social Science History Conference (Ghent, 13-16 April 2010), where a Dutch, an English and three German scholars with an interest in the field met, was the inspiration for convening the Haarlem conference.

Financial support came from a number of Dutch almshouses: the Frans Loenenhofje, the Hofjes Codde & Van Beresteyn, the Rozenhofje, the Hofje de Armen de Poth and the Koninklijke Haagsche Woningbouwvereniging van 1854. Funds were also obtained from the Royal Netherlands Academy of Arts and Sciences, the International Institute of Social History in Amsterdam and  the Dutch almshouse association, the Stichting Landelijk Hofjesberaad.

With Professor Marco H.D. van Leeuwen and Hamburg University’s Frank Hatje, I issued a call for papers. Meanwhile Daan van den Briel and Maarten Poldermans, members of the board of the Stichting Landelijk Hofjesberaad closely co-operated with regard to the practical organization of the conference. The conference was eventually entitled Almshouses in Europe from the late Middle Ages to the Present – Comparisons and Peculiarities and sixteen scholars were invited from Denmark (one), England (seven), Germany (two), the Netherlands (four), Norway (one) and Switzerland (one). 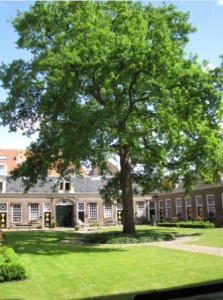 The conference was held in Haarlem’s picturesque Mennonite church – a ‘hidden’ church even to this day not visible from the main streets –  and included among others a reception hosted by the Haarlem Town Hall. Over two and a half days the conference heard the speakers’ papers and hosted a walking tour around a number of Haarlem almshouses. Attendants included several scholars and trustees of Dutch almshouses and even an architect from Japan, who came specifically to Europe for the conference.

Given the pioneer nature of the conference, most speakers concentrated on giving a descriptive paper of the almshouses they studied. Usually they focused on almshouses in a certain area, either a particular city or region. Most speakers moreover concentrated on a particular aspect of almshouse history: thus some scholars focused specifically on the founders of almshouses – often private persons – whilst others laid more stress on the inmates. Finally, there were also speakers who focused specifically on almshouse architecture.

Despite these differences in emphasis, it soon became apparent that there were many similarities between the almshouses under scrutiny. One of the findings was that for an almshouse founder the representation of one’s memory and charitableness was usually of great importance, no matter where he or she was from. Other findings were the recurrent motive of responsibility for one’s dependents and surroundings, the emphasis on respectability as criterion for prospective inmates, and the common conclusion that inmates of an almshouse as a rule were better off than their peers outside. This explains, at least partly, why places in an almshouse were sought after, no matter where they were. Almshouses moreover offered an amount of privacy quite unlike other institutions of social care. These findings show unequivocally that the existence of almshouses is a European rather than a national phenomenon, and that almshouses across Europe shared common defining traits.

As a consequence, the conference also raised questions such as: How exactly one should define almshouses? This question could not immediately be resolved, as not all almshouses were alike in form and function. Moreover, would it not be more appropriate to cast the nets wider, and study almshouses in the context of care for the elderly as a whole, thus including for example hospitals and nursing homes, categories of institutional care which often share a rather blurred boundary with almshouses?

Another question which remains unanswered is how ‘European’ almshouses actually are. The call for papers did not result in applications by scholars from Belgium – where many almshouses existed and exist – nor from France and Southern Europe. Are almshouses then a North Western European phenomenon? The presence of one almshouse in Pienza, Italy, is suggestive that this was not the case, but may well have been the exception proving the rule.

In any case, at the conclusion of the conference many participants expressed the hope that this conference will be followed by others, allowing a further exploration of the perspectives opened up in Haarlem. In the meantime, it is the intention to publish a number of the Haarlem papers.