London has a great variety of places and spaces of interest to the historian of charity. Every September, Open House opens the doors of over 700 buildings of all kinds across the capital opened to the public.  Many of these have strong appeal for those interested in voluntary organisations and their past, from settlement houses to voluntary hospitals, philanthropic housing schemes to charity schools. In fact, many are open to the public throughout the year or can be viewed from outside as part of a walking tour of voluntary action history. Last weekend, I took a small group on this tour. 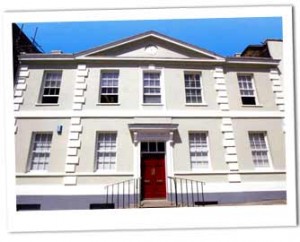 I started at the Marx Memorial Library, an impressive building in Clerkenwell Green which began life in 1738 as a charity school for the children of poor Welsh artisans. It is most famous for housing a radical publisher, of which an early benefactor was William Morris. It was to the offices of the Twentieth Century Press that Russian exile Lenin turned when looking for a press to publish his newspaper ISKRA. Between April 1902 to May 1903 Lenin worked in a tiny office on the top floor, evocatively preserved as it was when he moved out.  The Marx Memorial Library was set up in 1933 and now houses a library, museum and various events.

Just round the corner is the Museum of the Order of St John which tells the story of the Order of St John from its origins in eleventh-century Jerusalem to its modern incarnation as the first aid charity St John Ambulance. The Order was originally a religious order with a duty to care for the sick and in the 1140s was given a ten acre site in Clerkenwell to form its English headquarters.  The museum is housed in the 16th century St John’s priory gatehouse, which survived the dissolution to become a pub in the Victorian era and was rescued from disrepair in the late nineteenth century. It now features an Edwardian pastiche of a Tudor meeting hall upstairs. Nearby is the Priory Church of St John, which stands on top of a remarkable twelfth century crypt, an ancient and eerie place unlike anything else I have seen in London, complete with macabre skeleton tombs. The museum is free to visit all year round.

Moving further west I visited the headquarters of the Art Workers’ Guild, housed in an eighteenth-century town house in Queen’s Square, just behind Great Ormond Street Hospital. The Guild was formed in the 1890s by leaders of the Arts and Crafts movement. The building is a strange mix of early Georgian and Victorian Arts and Crafts, with the guild’s meeting hall housed in a former printer’s workshop at the back of the house. A bust of William Morris takes pride of place above the central dais. 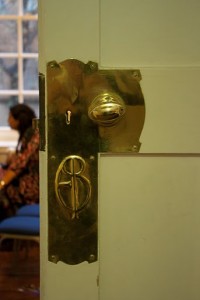 If you are feeling in the mood for more Arts and Crafts design, ten minutes walk north on Tavistock Place is Mary Ward House (see photograph right). Designed in 1895, it was originally known as the Passmore Edwards Settlement, after its benefactor, newspaper magnate turned philanthropist John Passmore Edwards. It was designed by architects Brewer and Smith with a remarkable congruity between its purpose as a settlement and its architecture. You can see the favourite Arts and Crafts motif the tree of life in brick relief on the right hand side wall and the stone eggs – symbol of creation – on the facade. The library is dedicated to Idealist philosopher T. H. Green whose initials decorate the wooden panels. The settlement was founded by Mary Ward, best-selling author of the classic Victorian crisis-of-faith novel Robert Elsmereand ran a range of activities including lectures and recitals, a Poor Man’s Lawyer service and a play centre for children. It was renamed after her in 1921 and following significant restoration is now used as function venue and open to the public only rarely. You can admire the architecture from the outside however and read an inscription about its original use which hangs over what was residents’ private entrance way on the left of the building.

Visiting these sites offers something special to the historian. We bury our heads in books and, here on this blog, we regularly discuss how archival research can piece together a useful but partial view of the working of voluntary organisations in the past. Every now and again it can be useful (and fun) not only to read about these places but to visit them. It puts that reading in a new light when you have walked the halls of these buildings and it is a tour I thoroughly recommend.