Bob Snape is a Reader in Leisure and Sport and also Head of the Centre for Worktown Studies at the University of Bolton. His research centres on the history of leisure 1850–1939. He has published on a number of voluntary organisations, notably the National Home Reading Union and the Co-operative Holidays Association. His current research is focused on leisure and voluntary social service in post-World War One social reconstruction. 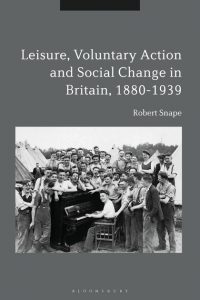 Much of the early historiography of leisure in Britain was concerned with mid-nineteenth century rational recreation and the moral improvement of sports, games and amusements through philanthropic and religious intervention.  The idea of ‘recreation,’ with its utilitarian overtones, was well suited to the period; by opening parks, building libraries and museums, establishing Sunday schools and forming social institutions for young adults, for example the YMCA and YWCA, the use of spare time could be moulded to encourage moral behaviour and civilized manners. However, by the later nineteenth century the concept of recreation as part of a civilising mission became less credible as social investigations, notably Alexander Mearns’ The Bitter Cry of Outcast London, published in 1883, revealed extensive drunkenness and vice and both spiritual and material poverty in the capital city. Rational recreation, it appeared, had not worked. Christian socialism and a nascent social science argued that social problems could not be addressed by focusing on the individual but through social solutions and radical changes to social structures and institutions. Accordingly charitable philanthropy, which worked on the principle of case-work, identifying and helping the deserving poor, was increasingly criticized by advocates of social work who saw change in society as a prerequisite for individual betterment. The decades on either side of the beginning of the twentieth century saw a contest between advocates of charitable philanthropy, exemplified in the Charity Organization Society, and social liberals and Fabian socialists who sought to displace its model of philanthropy by social work. By 1930 charitable philanthropy was by no means extinct but social work, by then widely referred to as social service, had become dominant within policy discourse. The relevance of this to leisure is that it was within this transition that a modernizing social idea of leisure superseded that of recreation. In other words, the historical development of voluntary action from charity to social work and of rational recreation to leisure were closely entwined, not just in terms of practice but also of theory.

The processes through which this came about are detailed and complex.  From the eighteen-eighties social and philosophical interpretations of leisure became of interest to social policy makers and cultural commentators, producing a discourse of leisure and voluntarism that flourished until the Second World War but which remains largely overlooked in the historiography of both leisure and voluntary action. Through the work of John Ruskin and William Morris, leisure acquired a humane value but was not, as the social economist John Hobson pointed out, equally distributed. A major influence on debate around leisure was Thomas Hill Green and his school of social idealist philosophers who articulated a model of the good society and the political obligations of the citizen, thus connecting the use of leisure with social change and citizenship. The work of these social critics and philosophers helped shape theory and policy around social work and leisure and was diffused through a multiplicity of channels which included monographs and journal articles, particularly those published in the International Journal of Ethics, seminars, and discussion circles concerned with the social sciences. There was too, from the eighteen-nineties, considerable correspondence between social workers in Britain and those in the United States of America where similar concerns about urban working-class life and citizenship were becoming pressing.

After the First World War the demand for radical social reconstruction led to increased interest in voluntary action in terms of community building. The National Council of Social Service, established in 1919, saw the enhancement of community well-being as one of, if not the most important, of its tasks. Its first conference was held in Manchester in 1919 on the theme of ‘The Leisure of the People’ with a range of papers outlining proposals for varied forms of voluntary action through and for leisure. Leisure had important theorists in the inter-war period, notably Ernest Barker, a classicist who as Chair of the National Council of Social Service New Estates Community Committee re-articulated Aristotle’s work on leisure and civic action as a model for voluntarism through housing estate community centres and Cecil Delisle Burns, Stevenson Lecturer in Citizenship at the University of Glasgow, who saw a new leisure of mass culture, voluntary association and shared experience as a harbinger of a modern civilization. More radical understandings of leisure and social change through voluntary association and action were proposed by left wing associations, for example the Kibbo Kift, Woodcraft Folk and various worker-sport organizations.

Leisure and voluntary action were thus inter-twined in several different social, political and cultural contexts. Social change was not always a sought outcome; several organizations remained conservative in outlook while numerous expressive voluntary associations existed solely to enable or promote participation in a hobby or a sport. The histories of those organizations which did seek social change through leisure, however, open a new and revealing window on social policy and voluntary action in a period of rapid and extensive social change in Britain. Leisure, Voluntary Action and Social Change in Britain 1880-1939 (London:  Bloomsbury, 2018) attempts to capture these patterns of integration of voluntary action and leisure and to re-introduce some significant and relatively forgotten thinkers on leisure, social citizenship and voluntary association.

To see a preview of the book click here.

This entry was posted in Archives, Features. Bookmark the permalink.