Michael Locke is an independent writer, researcher and adviser, formerly employed by the University of East London, Volunteering England and NCVO. In this blog, Mike reports on a new archive of community history, which covers the ground of his witness seminar to VAHS, and highlights themes of community action and partnership with local authorities.

The history of community action to build a nursery centre in London’s Notting Hill is captured in a website launched in May (www.maxillaarchive.com). It celebrates the life of Maxilla Nursery Centre (1978–2015) through interviews with parents, professional staff and community activists, pictures and archives of reports and press clippings.

This website tells the big story which I featured in my witness seminar ‘A place in a community’ to VAHS in November 2015. My presentation focused on how I got involved in the campaign to create the under-5s services the community needed and then in the management of the centre and governance of the charity. You can listen to the seminar here: http://www.history.ac.uk/podcasts/voluntary-action-history/witness-seminar-place-community.

Maxilla Nursery Centre was a trailblazer in combining the traditions of nursery education, social services day care and the playgroup movement and offering year-round, full-day provision for children from babyhood to five years old. 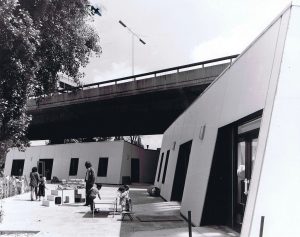 Our campaign to build the centre was founded on members of the local community working in partnerships with the local authorities, the Royal Borough of Kensington & Chelsea and the Inner London Education Authority. As a voluntary organisation we found a mutual interest with local authorities in introducing new provision to meet needs in our community; and we demonstrated that we the community could run a public service.

The strength of our campaign was set against a background of community action in the locality during the 1960s. People had struggled and organised against poverty, racism and housing conditions. They had created Notting Hill Carnival and Notting Hill Housing Trust, as well as initiating the Law Centre, Social Council and Adventure Playground. These actions had developed the political commitment, skills, networks and community organisations – in current terms, the social capital and infrastructure – which our campaign drew on.

By 2006 the voluntary organisation had been defeated by reduced public funding and increased competition for charitable funding and had to back out of Maxilla, ending the provision for children under 3 and its parents centre. That left the nursery school element run by the borough; it became Maxilla Children’s Centre and kept alive parental engagement and support. Finally, last summer, the local authority moved the school out of Maxilla to merge with another nursery school.

The closure of Maxilla generated a celebration of its extraordinary work with parents and children for nearly 40 years. Lisa Nash, a former parent and governor of the nursery school, working with Corner 9 Arts Project achieved funding from the Heritage Lottery Fund – with further support from local funds – to create the archive that is now online.

The closure of Maxilla and the development of the website took me back into history. I dug out of my loft several boxes of committee minutes and reports from 1973 to 1987. With Lisa Nash and with Judy Wilcox – Coordinator of Maxilla Nursery Centre, and previously the Community Worker with the People’s Association who started the campaign and got me involved in 1972–73 – we pieced together events. We matched the records to our memories, finding a few inaccuracies in the memories. Lisa and her volunteer team recorded and filmed interviews for the archive. In an essay in the archive I reflect on how pragmatism came through more strongly than radicalism – perhaps more so for having been re-reading committee minutes from over 30 years ago.