Feature: Philanthropy and the City of London

Rhodri Davies leads the Giving Thought policy programme at the Charities Aid Foundation (CAF).  He has just finished writing a book on the role of philanthropy in UK society from a historical and modern perspective, which is due to be published next year.  In this blog post he uncovers the historical trends behind the present culture of philanthropy in the City of London.

One of the key themes underpinning philanthropy is wealth.  The nature of wealth and attitudes toward it within society play a vital role in determining the scale and scope of philanthropy at any given point in time.  An important aspect of this is the balance between inherited and created wealth.  There has been a long-term shift in this country from the latter to the former, which has accelerated during periods of significant wealth creation (such as the rise of the Tudor merchant class or the Victorian age of the great industrialists).  The last two decades have seen a particularly marked shift towards created wealth.  When the Sunday Times Rich List was first published in 1989, over half of the people on it came from inherited wealth, but in the 2014 list the pendulum had swung the other way and more that eighty percent of those on the list were now self-made wealthy.

The City is obviously all about creating wealth, and is immensely successful at doing so.  But we should not assume that this automatically translates into a thriving culture of philanthropy.  The rise in profile and influence of the City since ‘Big Bang’ deregulation in 1986 has not been accompanied by the sort of blossoming of philanthropy that accompanied previous periods of major growth in the City.  Wealth creation, then, is at best a necessary condition for philanthropy rather than a sufficient one, which means that there must be additional factors which determine whether wealth creation leads to widespread giving. 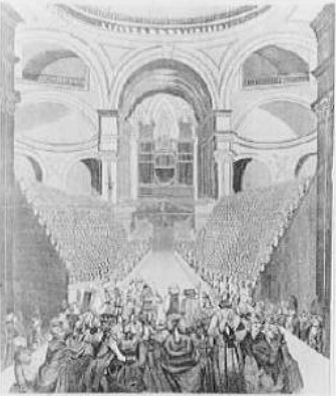 Religion and social status played large roles in the history of philanthropy in the City. The London Charity-School Children in St. Paul’s Cathedral (1789).

What are these factors?  There are a number we can identify, which although not exhaustive, give a good idea of why the present culture of philanthropy might have failed to live up to its historical precedents.  One obvious factor is religion.  This has always played an important role in philanthropy, not only in terms of direct giving to religious causes but also as a broader motivating force for giving to secular causes.  This remains true today; according to CAF’s UK Giving annual survey, religion is still the cause that receives the highest proportion of donations by value in the UK (although it is not the actually the most popular in terms of number of donations).  However, even if religion remains an important factor, its prevalence in society is nothing like it was in Tudor or Victorian times, when the charitable culture of the City was arguably at its strongest.  There is not the same universal compulsion to give that was felt by those who lived in times when religion was a backdrop to every aspect of life.

Another factor is social status.  In both the Tudor and Victorian eras, philanthropy was an important tool to cement status for those who had created wealth in a society that was still largely dominated by inherited wealth.  Although many would argue that a desire for social status is still a major part of philanthropy, the changing nature of class structures in the UK and the availability of other means for climbing the social ladder has undoubtedly lessened the importance of giving as a way of purchasing social standing.

But perhaps the most interesting factor affecting philanthropy when it comes to the City is awareness of need.  Whilst financial success creates a supply side for philanthropy, there is only a demand side if people have a reason to think about giving.  And in the past the most important pull factor (in London at least) was simply that the grinding poverty in which many of the capital’s inhabitants lived was inescapable.  Even the very wealthy could not fail to be aware of the suffering of those less fortunate than themselves, because the sheer scale of poverty and deprivation was right there in front of them every time they walked out their front door.

This acute awareness of suffering is a key factor in the origin stories of many of our most famous City philanthropists.  The former sea captain Thomas Coram, for instance, who latterly worked in the City and became famous for his role in the founding of the Foundling Hospital, was reportedly driven to act when he was on his way to work one day and he saw a young mother literally in the act of abandoning her child in the street.  He decided then that he could no longer ignore the problem and dedicated the rest of his life to helping abandoned children. 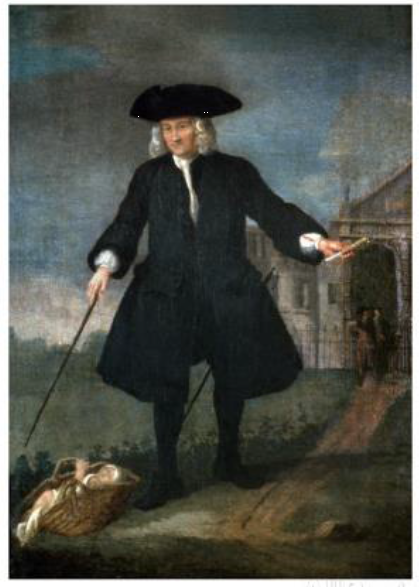 Of course, if most City workers today saw the same thing I don’t doubt for a second that their response would be similar to that of Coram.  The difference is that they are often never faced with this kind of evidence of the suffering of others.  City workers usually live in wealthy areas of London, or in commuter suburbs; they travel to work, work long hours, and travel back again, all without ever seeing the other side of life in London  that is the reality for many people living in the capital.  Evidence from the United States clearly shows that when wealthy people live in areas that are not economically diverse, they are less likely to give to charity.  Intriguingly, all that it takes to overcome this problem under experimental conditions is to show these wealthy people a short video on child poverty.  And in a real world setting, as Professor Paul Piff of the University of California at Berkeley explains, ‘simply seeing someone in need at the grocery store—or looking down the street at a neighbor’s modest house—can serve as basic psychological reminders of the needs of other people… Absent that, wealth will have these egregious effects insulating you more and more1’.

People who are trying to nurture a culture of philanthropy in the City are well aware of this ‘seeing is believing’ phenomenon.  Many corporate programmes that seek to engage employees with charitable giving start by taking them to visit the work of charities or community groups in the local area to understand the problems they are addressing and the challenges they face.  This is often very successful at establishing the initial link with a cause that is the prerequisite of long-term giving.

I don’t hold much truck with those who yearn after the ‘golden ages’ of philanthropy of the Victorian and Tudor eras.  There are many factors that drove their philanthropy that we cannot replicate today, and many that we would not want to even if we could.  However, the example of the City shows that there is plenty we can learn from looking at the history of philanthropy, both in terms of things we can do to encourage giving and the pitfalls to avoid, as long as we interpret them from a modern context.  There are many aspects of philanthropy policy and practice that would benefit greatly from such a dose of historical perspective.

1.  Ben Gose and Emily Gipple, ‘Rich Enclaves Are Not as Generous as the Wealthy Living Elsewhere’, Chronicle of Philanthropy, 19 August 2012.