Mike Mantin is a Research Fellow for the Wellcome Trust-funded project, Disability and Industrial Society: A Comparative Cultural History of British Coalfields 1780-1948, at Swansea University.  Here he shares his impressions of a recent multidisciplinary workshop on disability history.

Disability history, by its very nature, crosses boundaries and disciplines. Writing about disability in history is writing about social and economic marginalisation, literary symbolism and changing interpretations and models of health. Most importantly, it resonates enormously with the contemporary fight for health and welfare for disabled people. It is with this in mind that the collaborative history project on which I work as a Research Fellow, Disability and Industrial Society: A Comparative Cultural History of British Coalfields 1780-1948, organised our professional workshop, Looking Back, Moving Forward. Held at Swansea’s National Waterfront Museum in early April 2014, the event brought together various healthcare professionals —ranging from student nurses to physiotherapists and archivists— to discuss the history of disability in the coalfields and the everyday dangers facing workers in one of the most dangerous of British industries.  Although South Wales’ once-sprawling coalmining industry has all but disappeared, all those working in healthcare in the area were familiar with its lasting health impact, making confronting the past even more important. 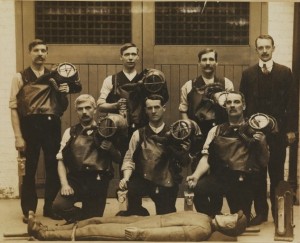 A rescue brigade of a coal mine in Wattstown, Wales, in 1914. Image courtesy of the Wellcome Library, London

After brief talks by Anne Borsay and David Turner introducing the study of disability in the past, the workshop participants were split into four small groups for sessions themed around a particular source. The sessions brought together material for discussion from across the timespan of the project, making room both for the rulebooks of eighteenth-century friendly societies and Second World War propaganda films about rehabilitation centres. The vivid sources were at the centre of each session and helped spark the discussion. Steve Thompson and Ben Curtis’ talk explored the spread of chronic obstructive pulmonary disease from the most human of perspectives, by using a Picture Post article profiling the 1929-30 Aberpergwm football squad.  The team had flourished that season but, by 1945, seven players were struck with the disease; the remaining four were either dead or seriously injured from accidents.

Elsewhere, David Turner and Dan Blackie used the rules of mutual aid associations to explore the ‘mixed economy of welfare’ for disabled miners. Whilst the dreaded workhouse loomed large in popular and historical imagination, the voluntary sector played a crucial role, adding further complexity to discussions about the historical roots of the modern concern with ‘welfare dependency’. Another session led by Kirsti Bohata and Alex Jones shifted the focus to coalfields literature, much of which recorded the proliferation of disability in the pits and the mining towns. Disability served not just as a symbol of the industry’s human devastation but as a narrative device, individualising the lived experience of disability. 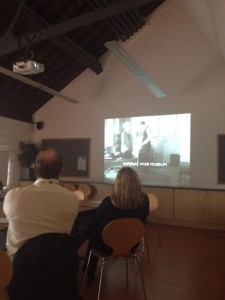 My session, co-run with Anne Borsay, used as its discussion point the short wartime film Life Begins Again, which follows a disabled worker from injury to recovery in the new industrial rehabilitation centres, explained via the somewhat questionable acting skills of the doctors and physicians working in the institutions.  The viewer is taken into rehabilitation centres such as Talygarn House in South Wales, which used a model based as much on returning patients to economic productivity and masculinity as to fitness and health.  We ran the workshop with each of the four small groups during the day.  All four of the discussions we witnessed were completely different, and all centred around the work experiences and opinions of the participants. The rehabilitation programme’s embrace of holistic medicine and industry-specific programmes of returning to work struck a chord with some of the workshop participants. Many saw the ambitiousness of the programme, and its embrace of both physical and mental treatment, as something that might be a positive influence on modern-day healthcare. Others pointed out how the film was very much a product of its time, as it was a programme of state rehabilitation aimed at filling a labour shortage created by the war. (That, and the fact that everyone is chain-smoking throughout.)

The final session of the day was a plenary discussion led by Andrew Davies of Abertawe Bro Morgannwg University Health Board, Rhian Davies of Disability Wales, and Joy Merrell of the College of Human and Health Sciences at Swansea University.  The plenary discussed the themes explored in all of the sessions and tied together disability issues historical and contemporary. Andrew Davies saw the treatment of disabled people in the past as a cause for reflection on modern-day issues of accessibility, which he argued should be at the heart of disability policy.  Rhian Davies discussed the individualised narratives of the sources and stressed the need for society to recognise the need for disability access and move on from the notion that disabled people have an individual duty to simply ‘get better’. Merrell saw the event as highlighting the need for the healthcare profession to look back at the past and ask what modern-day lessons it can offer. A particularly important point she brought up was the need to recognise the multiple sources of medicine and welfare in the historical coalfields, with voluntary and community care side-by-side with emerging state welfare and health programmes.

The feedback for the workshop was positive. Participants told us that they enjoyed discussing historical issues with the varied group and contrasting historical issues with current standards and practices. As well as this, the workshop allowed for an open forum to think about conceptions of disability, the historical roles of the patient and the healthcare professional and the complex legacy left by the coal industry —not just its devastating record of disease and illness, but also its strong communities. The lesson that we took away from the day is the importance for historians to work with the communities and professionals whose lives continue to be affected by the histories they study.