Feature: The YMCA at War

For our April feature, Jon Weier considers the role of the First World War in the development of the YMCA. This case study fits with the increasing focus of historians on the importance of charity work within the war effort.

Most scholars of the First World War have, at some point, come across the war work of the Young Men’s Christian Association (YMCA).  Anyone interested in questions of morale, the daily life of soldiers or the provision of religious services among Allied combatants will encounter this history.  Even those with very different historical interests will often come across some of the countless letters written on YMCA stationary by soldiers and prisoners of war, providing a tangible reminder of the extent of the YMCA’s work with men in wartime.  While the role of the YMCA is familiar to many scholars of the First World War, very few military scholars recognize the full extent of this involvement, or the important role the First World War played in the history of the YMCA or in the development of the modern charitable or voluntary sector organization.

When the First World War broke out in the late summer of 1914, the YMCA had experienced 70 years of remarkable growth and development.  Founded in London in 1844 by George Williams, a draper, the YMCA was intended as an association that would serve as a meeting place and organizational home for young men working in industry who sought a place of refuge from the social dislocation associated with the Industrial Revolution.  Originally the YMCA was a small organization, with only a handful of industrial workers meeting together in the back-room of the shop where Williams worked.  By 1851 it had spread to most English industrial cities, with 24 local associations comprising 2700 members across Britain.  At this point associations were founded in Boston and Montreal, the first YMCAs in North America and the first established outside Britain.

By 1914, at the outbreak of the First World War, local YMCA organizations were present in numerous communities, from major cities to small towns, in Great Britain, Canada, the United States, Australia and New Zealand.  YMCAs had been established in major cities throughout Western and Central Europe and as missions in India, China, Japan and other countries in Asia and Africa.  The American military YMCAs were making inroads into Latin America accompanying American occupation forces after the conclusion of the Spanish-American War.  The total YMCA membership was over 1.1 million members in 45 countries, presided over by a governing body established in 1855 at an association conference in Paris.  YMCA members were important figures in the founding of numerous religious and secular charitable organizations, including the International Red Cross, which was founded in 1859 by Henri Dunant, a co-founder of the Geneva branch of the YMCA.

Throughout this period, the YMCA developed numerous areas of specialization working with young men to develop their spirit, mind and body in a context of Christian masculinity.  This work included everything from providing meeting places in which young men could meet together in Christian communion to more active work with industrial workers or immigrants to improve their vocational skills or help them integrate into Christian society.  The latter years of the 19th century also saw the organization make its first inroads into physical education and social hygiene, work that was to become a hallmark of YMCA work to the present.

Along with religious and social service work, the YMCA became involved in war work almost immediately after its founding.  The American YMCA provided chaplaincy, medical and recreational services for Union soldiers in the American Civil War as part of the United Christian Commission, and forty years later under its own auspices during the Spanish-American War.  During the Boer War at the turn of the 20th century, the YMCAs of Britain and its Dominions – Canada, Australia and New Zealand – provided similar services to Imperial troops building on work that these YMCAs had done at militia training camps from the 1860s on. 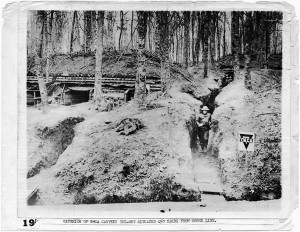 The First World War, however, was to become an apex for the YMCA.  Not only did the YMCA have an important influence on social and civic life in the early 20th century, especially in North America, the First World War was to see a period of unprecedented growth for the organization.  National YMCAs were to play significant roles providing morale-building, recreational, religious and medical services to combatants and prisoners of war, and YMCA secretaries were present in training camps, on battlefields and in POW camps in every affected country.  These services ranged from manning canteens in the trenches where frontline soldiers could get a hot cup of tea, to organizing and refereeing sports days, to providing skills training for demobilized and invalided soldiers.  The YMCA was essentially willing to provide any services that would further its work with young men, and further the military goals of the Allied powers.

From the summer of 1914, national YMCAs pledged their services to their national war efforts.  The leadership of the Canadian YMCA, for example, met in August 1914 and pledged all of its resources to the Canadian war effort.  By the time Canadian recruits began to arrive at Valcartier training camp in September the YMCA was ready to receive them with religious tracts and warm tea.  The Canadian YMCA was to become the primary provider of comforts and recreation to members of the Canadian Expeditionary Force in France.

Arthur Yapp, the General Secretary of the English National Council of YMCAs, saw the First World War as a fortuitous opportunity to revive the fortunes of an organization that had stagnated somewhat in the context of the explosion of religious youth-oriented organizations in late 19th century Britain.  During the four years of war, British YMCA secretaries and workers spread around the world serving the religious, social and emotional needs of British solders, as well as other Dominion and Imperial soldiers, everywhere from the Western Front to the jungles of East Africa and the deserts of the Middle East. 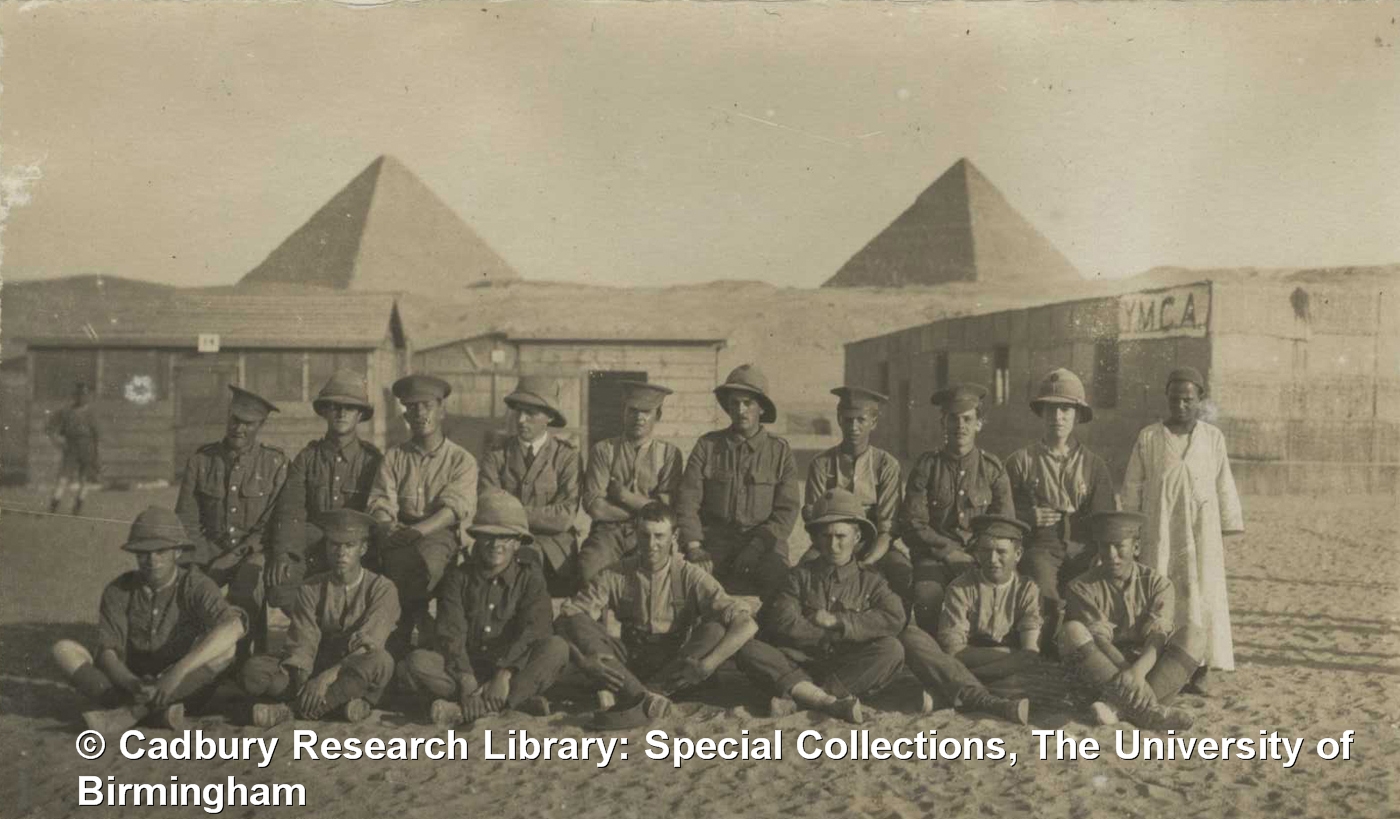 In the United States, John R. Mott, who was to become General Secretary of the National War Work Council of the YMCA, offered the services of the organization to President Wilson in a telegram sent upon the American declaration of war with Germany in April 1917, an offer that was later repeated in person and resulted in the creation of a truly unprecedented mobilization of a voluntary sector organization around a national war effort.  This American war work built on work the American YMCA had already been doing in conjunction with other neutral YMCAs providing services for prisoners of war and refugees in Britain, France, Germany and Russia.

Over the course of the four years of war, national YMCAs committed themselves to ever greater lengths in supporting their national governments.  Though initially involved largely in providing chaplaincy, recreational and medical services, YMCAs gradually became more and more involved in recruiting and propaganda, as well as fundraising for the provision of these services.

This newfound capacity was to serve the YMCA extremely well in the post-First World War period.  In the immediate pre-war period, both the Canadian and American YMCAs, which were governed as part of the same North American International Committee, were experiencing something of a crisis in recruiting the workers they needed to staff new associations and expanding work among industrial workers.  The First World War provided the impetus for a remarkably successful recruiting campaign.  The American YMCA, especially, increased its workforce dramatically in 1917, recruiting 20,000 new workers to work with American and other Allied servicemen in the United States and around the world.  While many of these men left the YMCA service at the end of the war, many more stayed on, renewing and strengthening the YMCA’s cadre of trained leaders and workers. 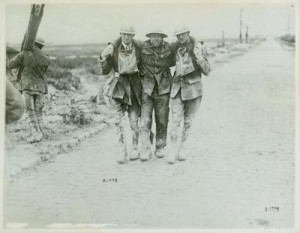 The North American YMCAs were also remarkably successful in raising money to support this war work.  The American YMCA, as part of a coalition of charitable organizations, the United War Work Campaign, raised over $200 million to support the work of the YMCA and others.  While the American campaign raised money explicitly for war work, similar Canadian and British campaigns raised money that was later diverted to other association programs.

This success was somewhat problematic for the YMCA after the war.  All three national YMCAs wrote reports detailing the work they did that they then submitted to their relevant war departments.  This was partly about promoting the YMCA’s participation in the First World War effort, but also about defending the organization against charges that, among other things, the YMCA had attempted to convert Catholic or other non-Christian soldiers to Protestantism, as well as to the charge that the YMCA had benefitted financially at the expense of Allied soldiers.  There was also a certain questioning that happened within the different YMCAs, similar to that which happened within various churches and religious groups, over the propriety of involvement in a war that had come to be so questioned after its end.  All of these factors contributed to the much less belligerent attitude of the YMCA during the Second World War.

The First World War was an important moment in the evolution towards stronger national YMCA organizations, due to their increasing involvement in national war efforts and campaigns, and a weakening of the influence of international structures.  Accompanying this was an increasing bureaucratization and professionalization.  This also contributed to different attitudes and directions in regard to war work.  The Canadian YMCA has, since the end of the First World War, followed a trajectory that has led to an increasing focus on peace and reluctance to engage in any kind of work with the Canadian military.  The American YMCA, on the other hand, has continued to engage in work with the military, so much so that a separate department, the Armed Services YMCA, continues to work closely with the US military to provide services to American soldiers and their families.

This history is an important one.  Not only does it contribute to our understanding of the First World War as we near the centennial of its outbreak, but the YMCA is also a useful organization to study in order to understand how war and conflict have impacted and guided the development and growth of the charitable and voluntary sector.

1 Response to Feature: The YMCA at War