In all of the pre-Christmas frivolity you may be forgiven for having missed an article in the Observer late last year, detailing how one in six charities could face closure this year. In the cold light of a New Year when many households are tightening belts and we have already seen some high-profile casualties on our high streets, it is striking to think that we may lose such a large proportion of our charities. When so many voluntary organisations provide much-needed services in straightened times, this raises a question of how society will fill the void they may leave and what the voluntary sector will look like by the end of this Parliament.

Throughout history, voluntary action’s fortunes have waxed and waned. Frank Prochaksa has written about a golden age of voluntarism in the high Victorian period and decline since. Equally, many believed that after the Beveridge report, the sector would shrink dramatically, when it in fact saw something of a boom in the 1960s with hundreds of new charities being registered each year. Again concern for the sector arose in the 1980s from fears about what Margaret Thatcher’s welfare reforms and ‘rolling back’ of the state would mean for voluntarism.

While concern about the future of the sector is valid in the face of a stagnant economy and budget cuts, history shows that voluntary action adapts and rises to the challenges of circumstance. More recent literature on voluntary action history, for example from Matthew Hilton in his edited collection on The Ages of Voluntarism, tends to stress the diversity and adaptability of voluntarism. It seeks ‘to tackle specifically the decline narratives’ and ‘champion interpretations of continuity and change’. One of the ways recent historiography on voluntarism has done this is by shedding light on previously neglected areas and inviting us to consider voluntary action in a wider sense. 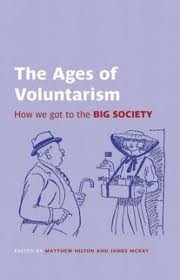 By seeing the history of voluntary organisations as one of ‘constant renewal and adaptation’ we can perhaps more optimistically anticipate what the sector may look like in the future. For people within the sector, the call by Colin Rochester and Meta Zimmeck, for voluntary organisations to ‘return to their roots’, might provide a starting point for this latest renewal.

Despite the bleak outlook, even from Colin and Meta in their recent review of 2012, there is hope that the sector will once again prove resilient and innovative. There has also always been a vibrant, though little understood, swarm of informal voluntarism which may yet soften the blow of fewer organised voluntary services. Whatever manifests itself in the short term, in the longer term the ‘big society’ and the new emerging welfare economy will appear to historians as parts of the same continuity and change which have always characterised voluntary action history. This, at least, should offer us some reassurance as most of us start the New Year, like many charities, with a bit less money in our pockets.

Matthew Hilton talks about his research into Non-Governmental Organisations.