Silent Spring: The Book that Made the Modern Environmental Movement

Since the end of the Second World War, there has been a growing environmental consciousness, largely influenced by various environmental disasters, such as the sinking of the oil tanker Torrey Canyon off the Cornish coast in March 1967. But it was also influenced by literature, and one influential work celebrates its fiftieth birthday this autumn. Written by best-selling author and scientist, Rachel Carson, Silent Spring describes the dangers of the uncontrolled use of pesticides. The book is often described as the book that launched the modern environmental movement in the United States, and has even been described by Stephen Fox as the “Uncle Tom’s Cabin of environmentalism”. Drawing on my research on modern British environmentalism, this blog post uses the book’s birthday this year as an opportunity to discuss its importance.

Silent Spring begins with a two-page introduction, ‘A Fable for Tomorrow’, describing a town which has been ravaged by an unknown chemical. Although it does not say explicitly, it plays heavily on the idea of radiation from nuclear fallout. The chapter ends with the warning that ‘no witchcraft, no enemy action had silenced the rebirth of new life in this stricken world. The people had done it themselves’. Following this, Carson begins in the next chapter by offering an ecological account of the world, different eco-systems, and the dangers these face. It is actually the third chapter, ‘Elixirs of Death’ that deals with DDT. Although this pesticide had been synthesised in the 1870s, it was not until the Second World War that it was produced in huge quantities, then in the years following becoming available to the general public.

The following three chapters cover water, soil and plants respectively and the problems they face from pesticides. The three chapters deal with pesticide effects on different eco-systems also describing how these chemicals move through eco-systems and get absorbed by different creatures, eventually being absorbed by humans. The remaining chapters cover different examples from the natural world on the use of pesticides, especially on the lives of birds. The final chapter, ‘The Other Road’, describes not only the situation at the time but predicts what would happen in the future with increased pesticide use, and what would happen if pesticide usage was reduced.

Rachel Carson had already written a trilogy of works on the sea before she tackled pesticide usage. These books had been best-sellers and had made the American public aware of this quiet, reserved woman. Despite having an interest in writing from an early age, Carson chose biology as her major. She graduated in the late 1920s before completing a Master’s degree in zoology in 1932. After some time teaching she got a job working for the U.S. Bureau of Fisheries. Her first work on the sea, Under the Sea Wind, was published in 1941. Whilst receiving positive reviews, it sold poorly. By 1945 the Bureau had become the Fish and Wildlife Service. Carson rose up the ranks and began supervising the small staff employed to write various publications for the service. By 1949 she was in charge of all publications and in 1950 she published her second sea-themed book, The Sea Around Us. This became an instant best-seller and Under the Sea Wind was republished, selling well second time around. In 1955 she completed the trilogy with The Edge of the Sea. By then Carson was an established author.

Although Silent Spring appeared in 1962, the overuse of pesticides had concerned Carson since the 1940s. One particular pesticide, dichlorodiphenyltrichloroethane (DDT) became inseparably linked to the book. Drawing on research and data from across America and abroad, Carson described the effects of pesticides on ecosystems, especially bird populations. The title refers to the decrease in bird populations due to pesticide poisoning and the quieter springs this caused. 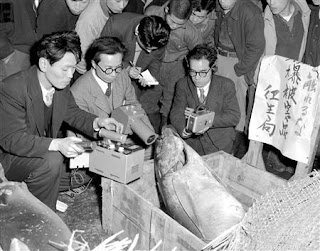 American society at this time was influenced by radiation scares caused by the radioactive fallout from nuclear weapons testing. One incident in 1954 involved a Japanese fishing vessel being caught by fallout after a US test, causing the ship’s crew to become sick and the fish radioactive. However this was not realised until after the ship had returned to Japan and the fish had been sold. All this was played out in front of the world’s media. Further controversy was aroused in the ‘Cranberry Scandal’ of 1959 where Americans were warned against eating cranberries with their Thanksgiving meals due to their high pesticide contents. The fact these chemicals were invisible further heightened people’s concern.

Carson received much commendation from different members of the scientific community; but she also received much vilification, especially from entomologists and agricultural chemists. She was described as being a hysterical woman or not a proper scientist. It was commonly said she wanted a complete ban on pesticides, which was not true, rather Carson wanted their use reduced and controlled. Dying of breast cancer in 1964, Carson never got to see DDT banned in the United States which happened in 1972. She had become ill in the 1950s, yet continued to research and write the the face of an aggressive illness that sometimes left her bedridden.

Recently there have been some revisionist accounts of the importance of Silent Spring, most notably Chad Montrie’s 2011 A People’s History of Environmentalism in the United States. He argues that whilst Silent Spring makes a good book end, the environmental movement actually began in the nineteenth century. This may be true; however the book caused people in the USA to think differently about nature and the natural world and to question supposed scientific wisdom. Silent Spring’s reception in Britain was less spectacular; the government argued that much of what Carson described was already known here and measures were in place to limit pesticide usage.

This year is a good time to look again at Carson’s work. Whilst sometimes she is placed on a pedestal over the impact her work had, this is largely justifiable. The impact of the book on the American public and the raising of their environmental awareness should not be dismissed; Carson’s work was, in the words of her biographer Linda Lear, a book that ‘changed history’. It is through Carson’s writing skills as much as her actual scientific analysis that she is so important – the book is easy to read, and was translated into several languages almost as soon as it first appeared in the United States (appearing in Britain in February 1963). With debates surrounding genetic modification of food today, Carson’s arguments made in Silent Spring are just as relevant as they were fifty years ago.

In my field of environmental history, Carson is, almost, a goddess. She is credited with starting the modern environmental movement, popularising ecology, and generally getting people to think more about the environment. If this book was published today, would it have the same impact? I think not. She herself recognised that if she did not say what she said, someone else would have. There has been some criticism about the banning of pesticides in countries as a result of her work which has led to an increase in malaria too. And some of her arguments about pesticides causing cancer are difficult to follow up on. Yet with debates today such as the genetic modification of foods, I find Carson’s message that everything is connected and by altering one thing you inadvertently alter something else as relevant today as it was fifty years ago.

For more on the history of environmentalism, see Mark Wilson’s personal blog at http://environmentalactivism.wordpress.com