Community Building and Voluntary Service: Student Volunteers and Unemployed Camps between the Wars

In the mid-1930s, Harry Rée was studying at Cambridge. A privileged young man, son of a wealthy family, educated at one of Britain’s finest private schools, Rée spent his long vacation living in a tent in North Yorkshire with a group of unemployed men, labouring side by side to straighten the River Rye and shore up its banks.

Rée’s camp was organised through the Universities Council for Unemployed Camps, one of several initiatives in interwar Britain that brought together student volunteers and the unemployed. UCUC was founded after a group of Cambridge students camped with unemployed men from Bristol and South Wales at Eastnor Park, where they cleared ground and built a bathing pool. UCUC attracted supporters from other universities, running at least seven camps yearly until 1939.

While UCUC camps were student-led and managed, other movements recruited among students. The best known is probably the International Voluntary Service for Peace. Led by the Swiss Quaker, engineer and conscientious objector Pierre Cérésole, IVSP recruited young men and women from different nations to work with local communities rebuilding areas shattered by war. Its first major activity was to repair war damage around Verdun, and a series of summer projects followed. 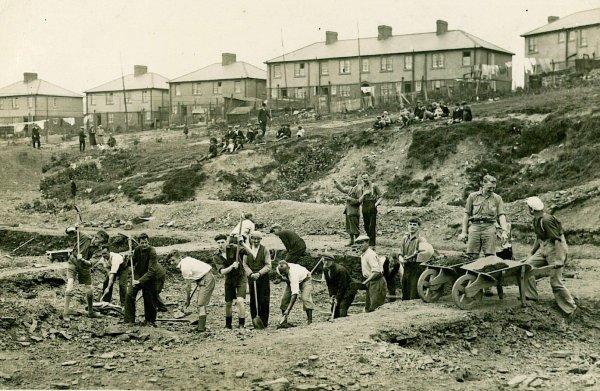 In 1930, IVSP volunteers – including seventeen university students, two teachers and one clerk from Britain – helped repair flood damage to the French village of Lagarde. In the following year, several of these young Europeans took part in a camp at Brynmawr, helping build gardens and a lido. Twenty-five IVSP British camps followed until the War. In some cases, the volunteers lived communally, sleeping on straw palliasses in halls or huts and in one case in a disused brewery, building connections across nations; in others they lodged locally, hopefully building bridges across the classes. 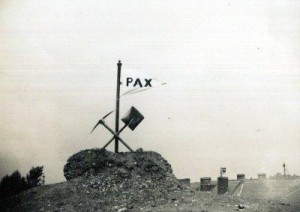 Work, for IVSP, was not just a way of getting things done. Its leaders argued that gruelling labour could ‘supply war’s moral equivalent in hard work and discipline’, while camp life was a parallel form of ‘service and sacrifice’. While it avoided military symbolism like a plague, it did nonetheless have its own emblem, available as a small silver badge for members, in the shape of a shovel bearing the word PAX over a broken sword.

Distinctively, IVSP recruited women as well as men. But the roles were segregated. While men helped level spoil heaps or turn derelict buildings into youth hostels, the women – known as ‘sisters’ – were expected to wash and mend their clothing, and ‘cook them a meal after their hard work’. Not until the 1950s did women overthrow this role.

Work camps were a common response to the economic crisis of the thirties. Unemployment was heavily concentrated geographically in the ‘distressed areas’ of failing heavy industry, and demographically among young men. For men who were poorly nourished and physically ‘soft’, a period of heavy labour was supposed to help build the body. The work was also selected because of its social value; several took part in archaeological excavations or restoring old buildings like the ancient post mill at Rolvenden, in Kent.

As well as physical conditioning, the camp environment was intended to build character and bridge the gap between the unemployed and the privileged young students. This was reinforced by a strong sports culture, with ferociously contested football competitions; by common clothing codes – college ‘colours’ and other badges of class were banned; and shared cultural activities, such when Oxford men and Welsh miners performed the miracle play Noah’s Flood, directed by the Chaucerian scholar Nevill Coghill, against the striking background of Pinkhill Locks. 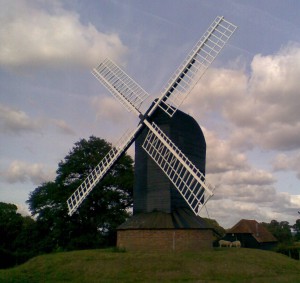 Students also organised camps for women, though these were provided a holiday rather than work. Students from Girton College were at the core of a group who between 1937 and 1939 spent summers on the coast of County Durham, running a camp for unemployed women and the wives of unemployed men. Sheila Nevell, one of the organisers, recalled that ‘it was not appropriate for women to live in a camp with men’, and anyway ‘we reckoned the miners’ wives needed a break’.

Supported by Durham Community Service Council, which provided its holiday centre at Marsden Bay, the Girtonians organised a variety of leisure activities from early morning swimming to concerts and dancing. They also organised educational discussion groups, modelled on the practices of the Adult School movement, to debate such issues as democracy, housing and public health reform.

What did these movements achieve? As well as reshaping Britain’s landscape, the students received a de facto training in a relatively democratic style of leadership and civic-minded values. Sheila Nevell, a career teacher, volunteered as a civil defence worker in the Blitz, and when I encountered her was organising quiz nights for residents in her sheltered accommodation, having given up voluntary maths tutoring for disadvantaged South London children. After distinguished service as a British agent in occupied France, Harry Rée became a prominent advocate of comprehensive schooling and community education.

Camps emerged from the settlement and guiding movements, and were among many ways in which students volunteered in the interwar years. The circumstances in which the camps emerged have changed radically, but let’s remember that unemployment is higher now than when the Universities Council for Unemployed Camps was at its peak.

1930s images are used with the kind persmission of Service Civil International.

This entry was posted in John Field, Research and tagged education, volunteering, women. Bookmark the permalink.