Empire and Mission: Singing from the Same Hymn Sheet?

In September 1947, amidst ‘the vast horror of fear and suffering’ in post-Partition Delhi, Dr Ruth Roseveare, an Anglican missionary of St Stephen’s Community, drew comfort from her knowledge of ‘a new Kingdom’ of Heaven in contrast to the ‘littleness of the present time’. She wrote at the time: ‘It is we who are on the march to the promised land, who here on earth find no permanent dwelling place, whose loyalty is not here but whose citizenship [is] in heaven’. Dr Roseveare’s allegiance, and that of her missionary colleagues, was not to the departed British Raj, nor indeed to the newly-independent Indian government: it was to Christ Himself. 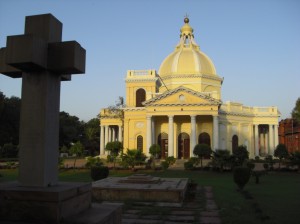 Whether they liked it or not, however, missionaries’ service of the divine Empire of Christ in the decades before 1947 was influenced by their position under the temporal British Empire. While we can learn much from studying their responses to the Raj, an investigation of imperial attitudes to their work can also inform us about the nature and priorities of missionary voluntary action in the subcontinent.

Forster’s depiction in A Passage to India of isolated missionaries ‘out beyond the slaughterhouses’ in Chandrapore, and Scott’s portrayal in The Raj Quartet of poor Barbie Bachelor, shunned by imperial society in Pankot, are both somewhat misleading. As De Caro and Jordan have shown, missionaries were certainly partial outsiders in the imperial communitas in India, distinguished by their white, rather than khaki, pith helmets. Women missionaries were particularly different from imperial norms. They subverted the ideal role of the white woman in India as an ‘incorporated wife,’ emblem of imperial honour and guardian of her race. They were usually single and professionally employed, and lived and worked in close association with Indians of all castes, classes, and creeds. 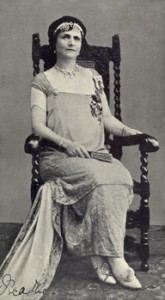 Yet, while they were hardly ‘pukka’ guests at memsahibs’ soirées, missionaries were nevertheless patronised, celebrated, and even directly employed by the British Raj. Viceroys, Governors, other important personages from the civil station and their wives attended fetes and Guide rallies, opened new buildings, and distributed prizes in mission hospitals and schools. They also donated money. In 1934, for example, Alice Steward, Principal of the CMS Girls’ School in Jeyi, reported a donation of £500 from the Vicereine, Lady Willingdon, which not only cleared the Mission from debt, but paid for an annual supply of drugs for the dispensary.

Missionaries were frequently honoured by the imperial regime for their work. Between 1917 and Independence, at least six of the missionary doctors at St Stephen’s Hospital in Delhi received the Kaiser-i-Hind, Emperor of India’s medal, as did Sister Wilkinson, the Nursing Superintendent. Dr Charlotte Houlton, Medical Superintendent between 1927 and 1933, received not only the Kaiser-i-Hind first class, but also the Coronation Medal of 1937, and was appointed a Commander of the British Empire in 1939. Clearly, these women were perceived to have rendered the Empire service.

Imperial benefactors supported mission precisely because its voluntary action was useful. Like lower-caste and casteless Indians who converted to Christianity in the ‘mass movements’ of the late-nineteenth and early-twentieth centuries, they recognised that missionaries were effective resource-providers. Medical work enjoyed especial imperial approval. This is shown by the responses to a questionnaire sent in the 1970s to wives of former government officials, army officers, planters and businessmen by Mary Thatcher, the archivist of the Cambridge Centre for South Asian Studies. The memsahibs were asked whether they considered missionaries to have done any good in India. Only two of the fifty-four respondents expressed hostility to missionary endeavour. The majority were of the opinion that missionaries had done good work, singling out medical mission as the area in which the most, or indeed, the only good had been done. 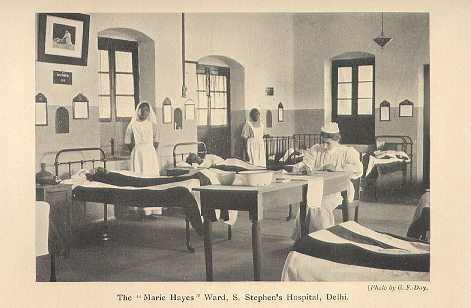 Missionary medical work appealed to imperial authorities as its practical results and benefits were immediately apparent in neat statistical tables of patients cured, babies delivered, operations performed, and nurses trained. Together with missionary educational work, it supplemented the imperial government’s minimal welfare provisions, allowing it to indirectly pursue a ‘civilising mission.’ In 1931, Jeffrey Cox has found there were thirty-eight mission hospitals in the Punjab, North West Frontier and Kashmir, twenty-one of which were staffed by women. In the same area, there were only five government hospitals. 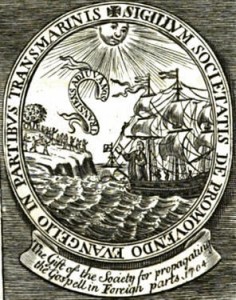 Seal of the Society for the Propogation of the Gospel

On occasion, mission was directly co-opted as a ‘moral arm’ of the imperial regime. Missionaries of the Society for the Propagation of the Gospel (SPG) were paid by the Raj to run the so-called ‘Criminal Tribes Settlement’ at Hubli in the Bombay Presidency. Here, the mission’s aims of teaching cleanliness, moral responsibility, and self-support to tribesmen identified by the government as hereditary ‘criminals’ coincided with imperial desires to reform and educate apparently unsavoury elements in Indian society.

While imperial support is testimony to the effectiveness of missionaries’ educational and medical work, it is also evidence of their evangelistic failings. As Gerald Studdert-Kennedy and Clive Dewey have demonstrated, despite the declared religious neutrality of the Raj, Christian notions of self-sacrifice, duty, and service underpinned the imperial regime. Yet, government officials were wary of aggressive attempts to change India’s religion for fear unrest would be provoked.

By the 1920s, however, missionary evangelism was neither threatening nor controversial. Village ‘mass movements’ appeared to be indigenously-motivated rather than a result of missionary coercion or evangelistic effectiveness, and mission institutions were hardly radical harvesters of souls. A report of 1925 from St Stephen’s Hospital in Delhi admitted: ‘We do not have most of the patients long enough to see results in the ways of conversions…’ Instead, missionaries hoped by preaching and setting an example of Christian service in their hospitals and schools, seeds would be sown which would bear future fruit. This gentle evangelism and focus upon selfless voluntary effort appealed to imperial sensibilities.

Missionaries may have regarded themselves as devoted servants of an extemporal Raj, but, to many imperial officials, their useful and unthreatening humanitarian service seemed also to benefit and to promote the ideals of the earthly British Empire. Mission and the Raj did not sing from dissimilar hymn sheets after all.

2 Responses to Empire and Mission: Singing from the Same Hymn Sheet?