For many parts of the voluntary sector 2011 was a year of brutal clarity, as the Coalition Government’s spending cuts and restructuring of public services began to bite. It was also a year of irritating opacity, as David Cameron’s vision of the Big Society, despite policy statements, seminars, conferences and copious punditry and speculation, came to be seen as pious flummery. This past year was never going to be the ‘best of times’, and even for those with long memories it might very well seem the ‘worst of times’. At any rate we will be glad to see the back of it.

The Coalition’s cuts in funding, use of commissioning for procuring public services and imposition of tighter controls on the purposes for which funding could be used – and subordination of the gentler aims of the Big Society to such ‘financial necessities’ – hit the sector hard in 2011. There was no hiding this unpalatable reality. Towards the end of the year the Public Administration Select Committee’s report on the Big Society noted that the Coalition’s new clothes barely amounted to a fig leaf: it had produced no ‘coherent plan’, fostered little public understanding of what it wanted to do and had, in effect, undermined the capacity of the voluntary sector to deliver whatever it was that it wanted (pp. 3 and 6-14).

Events of 2011 impacted negatively on the following:

Small and medium-sized organisations that have relied on funding from local authorities: Many of these have been hit by arbitrary and disproportionate cuts and are in danger of closing down services or, in some cases, going out of business altogether. Their desperate need for money was demonstrated by the huge increase in the number of competitors for the Guardian’s 2011 Charity Awards. Almost a thousand charities entered the race, many of them for the first time. As noted in the Guardian: ‘Whereas, in the past, entries would come typically from relatively young charities seeking to boost their growth, many that applied this time were long-established organisations that had lost local council funding in the spending cuts and were struggling to carry on.’ 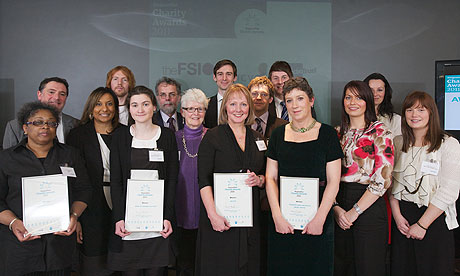 Small and medium-sized organisations that have relied on funding secured through commissioning: Many of these have long provided services funded by a patchwork of grants, service-level agreements and contracts, and have now lost out – without any real alternative – in new-style commissioning. Now the commissioning body decides – often unilaterally – what kind of services it will fund and specifies the funding it will provide, the outcomes it expects and, increasingly, how it wants the service or activity to be delivered. In practice public sector commissioners seem to prefer larger contracts (and therefore larger ‘Tesco’ organisations), to discount voluntary organisations’ previous history of successful service delivery and delivery of ‘intangible’ value to clients. Consequently they interpret opening up service delivery, which was meant to provide a ‘level playing field’ for voluntary organisations, as an invitation to select private sector firms, which appear to offer better risk management and lower unit prices. As can be seen from the roll-out of the Work Programme, this has resulted in voluntary organisations’ involvement in service delivery not as prime contractors in ever-larger contracts but as ‘bid candy’ sub-contractors or sub-sub-contractors – often to the detriment of their finances and their integrity. It has also resulted in larger national voluntary organisations crowding out smaller, local organisations in a fierce war for survival.

Infrastructure organisations: Unlike New Labour, which treated ‘second-tier’ and ‘infrastructure’ (or perhaps better named ‘superstructure’) organisations as key delivery agents, the Coalition sees little value in these organisations and little need to build their capacity. It announced the end of its programme for ‘strategic partners’ by radically cutting the number of organisations so funded and providing much reduced funding for a limited period. It terminated capacity-building programmes and Capacitybuilders, the quango in charge. It also structured its programmes for citizens involvement – Active at 60, Community Organisers, National Citizen Service, Near Neighbours – to emphasise grassroots organising (the people as their own leaders) in a way which largely bypassed existing local infrastructure organisations such as councils for voluntary service and volunteer centres.

Believers in the Compact and partnership: Just as the Coalition rejected the idea and reality of ‘strategic partners’ so too it rejected the idea of working in partnership with the sector and the reality of existing governmental arrangements for fostering that partnership. Its termination of the Commission for the Compact in the ‘cull of the quangos’ sent the message that partnership as an organising principle for relationships between government and the sector was ‘so over’.

Office of the Third Sector, Cabinet Office: The Coalition also demonstrated that its interest in and commitment to the voluntary sector was ‘so over’ by its downgrading of the Office for Civil Society – including budget cuts, high staff turnover, administrative muddle and even the loss of its organogram.

Researchers: The Coalition vociferously rejected New Labour’s regime of targets and measures and, with that, high-quality measurement of progress. It cancelled the Citizenship Survey, the Place Survey and the National Survey of Third Sector Organisations/National Survey of Charities and Social Enterprises, which might enable it to gauge its performance against existing benchmarks (clearly not a desirable option). Instead it opted for a regime of collecting management information leavened by ‘sensible’ self-assessment. This is bad news for researchers and analysts and ultimately for the public, which will have a hard time making sense of what the Coalition has done.

However, events of 2011 might impact positively on the future. Rather than dwelling on the current gloomy situation and the even bleaker prospects for the near future, we can end by underlining the historical significance of this annus horribilis and offering some more optimistic thoughts.

In the first place, as we have noted above, 2011 was the year in which two of the articles of faith on which much of the sector had operated were exposed as myths. The ‘natural’ relationship with government is not one of partnership based in common interests, and the crock of gold at the end of the commissioning process is not attainable by most organisations. This means that voluntary organisations can – and should – return to their roots by:

The events of 2011 have not only made this process of rediscovery possible but they have also made it the only possible way forward in ‘the worst of times’. 2011 may well mark a major turning point in the history of the voluntary sector, and 2012 may signal a renaissance among the ruins of New Labour’s attempt to colonise and co-opt voluntary action.