Locating Female Philanthropy: Past and Present

You don’t have to venture far today to see or hear about philanthropy. Placed at ‘the heart of the big society’ by leading coalition politicians in December 2010, as we head into 2012 it is big business. The role played by women in today’s philanthropic culture is understood to be undergoing a significant change in its own right, but in contrast to broader debates it has gone relatively unnoticed.

According to a recent Philanthropy UK panel of advisors to high-net-worth individuals, major female philanthropists often seek a deeper level of engagement and connection with the causes they support than their male counterparts. As part of the gathering wave of ‘new philanthropists’, they are leading the way in wanting to offer time, expertise and emotional engagement in their philanthropic commitments, and not just hand over a cheque. The movement between these various economies of action is observed as a distinctively gendered model of female philanthropy. But is this a new development? Turning to history suggests not only that it is not, but points to fundamental reasons why social commentators have often struggled to find the space to discuss female philanthropy.

Historians have been interested in women’s philanthropy for at least thirty years. The publication in 1980 of Frank Prochaska’s now classic book Women and Philanthropy in Nineteenth-Century England spearheaded a move away from earlier understandings of female philanthropy as a ‘woman’s mission’ towards an appreciation of it as a political activity in which women gained cultural and social influence. Since then, historians have refined interpretations of women’s philanthropy as politics by considering the roles played by class, generation, religious affiliation, family lineage, or personality in both women’s lives and voluntary effort.

Still, old tropes die hard. Lady Bountifuls remain a-plentiful in popular debates (as a recent discussion in the Observer of the coalition government-sponsored Working Families Everywhere scheme attests) and a fascination to scholars. And far too few discussions of women’s philanthropy, whether amongst historians or contemporary commentators, examine the ideological role played by gender either in constructing models which assume women’s caring and compassionate roles or in those which link women problematically with cultures of wealth.

One way of looking beneath these models is to consider the gendered intersections between public discourses of philanthropy and business, and how these have changed over time. For men, historically, there was a logical connection between business aptitude and philanthropy in discussions by and about men. This was made clear by Bolton-born ‘Soap king’ William Hesketh Lever, Viscount Leverhulme’s mantra: ‘My philanthropy is business.’ For women, the relationship has always been contested. 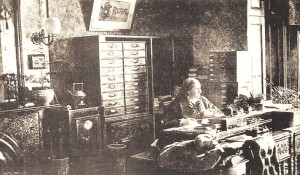 ‘Miss Robinson in her study at Portsmouth Soldiers’ Institute, 1892’ as reproduced in Sarah Robinson, The Soldier’s Friend: A Pioneer’s Record (1913)

There are some very famous examples of business acumen amongst late-nineteenth century female philanthropists. One is Octavia Hill, whose work in housing management led to her inventing a system of rent collecting. Another is temperance activist Agnes Weston, who went on to become a dame for her work providing accommodation and banking arrangements for sailors and their families. But the business capabilities of Hill and Weston were never straightforwardly attributed by contemporaries, who typically framed them beneath a prioritisation of their religious identities. In other cases, the business-like approach of female philanthropists was figured as part of or alongside demonstrably ‘womanly’ attributes. Technology played a part in this discursive process. The emergence of photography in the late nineteenth century co-incided with and helped make possible a trend for portraits of women philanthropists at their desk or in their studies. But, as in the case of temperance worker Sarah Robinson, this was usually mediated by signifiers of domesticity such as the well-placed kettle or similarly homely image.

Historical depictions of the gendering of philanthropists’ business sense are part of a wider and long-established intellectual tradition which associated men wholeheartedly, and women more awkwardly, with the capitalist system. Female philanthropists today are also acutely aware of this cultural uncomfortableness. In the summer of 2011, discussions at the Female Futures of Philanthropy event at the Centre for Charitable Giving and Philanthropy at Cass Business School, London concluded that while women play an increasingly important role in philanthropy and are on the whole more generous than men and have a strong influence on giving, they give less overall due to lower levels of wealth. 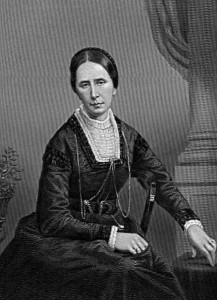 But measuring philanthropy in terms of money given is an inherently gendered (and elitist) practice in itself. This is demonstrated in published directories which all too often under-represent women. The Sunday Times Giving Index (established in 2001), which ranks Rich List members by the proportion of their total wealth donated to charity over the preceding year, resolutely fails to capture the influence, even in major philanthropy, of women in donor decision-making by couples and families. Looking in the historical archive, the Dictionary of National Biography (conceived of in the 1880s as an elite, male-centred canon) nearly always discussed philanthropic men in terms of how much money they donated to a cause, but it took the extraordinary philanthropic activity of Angela Burdett Coutts (listed as donating £362,000 (nearly £15 million today) as well as a number of endowments across her lifetime) for a woman to be discussed in these terms. 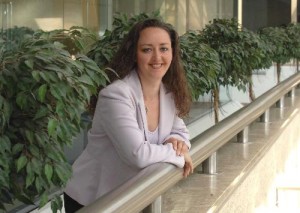 The restraints placed upon women philanthropists (and on women as a whole) by capitalism are profound but there is also a story to be told of how they have negotiated them. As reported in 2008 by Philanthropy UK, a contemporary example exists in the work undertaken by the corporate network BT Executive Women (BTEW). Chaired by Jane Swift, BTEW seeks to develop executive women’s skills and self-awareness in a male-dominated environment, and to facilitate the development of these skills for the benefit of helping less privileged women globally.

In the 1920s and 1930s, leaders of the Young Women’s Christian Association (YWCA) were engaged in a very similar project, which sought to develop the self-esteem of their members. It sought to do this by training them for life (in the workplace and beyond) and encouraging them to empathise with the social and political achievements and difficulties of women throughout the world. Historical context demands that the YWCA’s project is understood in the light of its Christian framework and the early twentieth-century campaigns for women’s political rights. But if the cultural, gender and social contexts of these projects seem far removed, the conceptual foundations sit remarkably close.

The BTEW project and the YWCA’s interwar endeavours illustrate how the personal becomes political in many instances of women’s philanthropy, past and present. This is not necessarily a feminist aim or outcome, but it is very often born of a woman-centred culture which prioritises collaboration over competition. From its highpoint of participation in the Victorian period onwards, women’s philanthropy has connected aims of self-development (of both giver and receiver) and the wider amelioration of society. Designated ‘spheres’ or colourings of political and moral activity were and are resolutely transgressed in this project. Self and society are brought together in women’s philanthropy, and its various economies of action are intertwined.