Carols and Curry? Christmas in the Indian Mission Field

It was certainly a far cry from turkey and plum pudding, a far cry from holly and mistletoe, and a far cry from candlelit carolling in a snowy English churchyard. For Christmas dinner in 1920, under banana trees in the blazing sunshine, Hettie Monkhouse ate goat’s flesh curry from a palm leaf plate.

For Hettie and her colleagues, life in the Indian mission field was far from easy. Emblazoned across the façade of the Church Mission Society (CMS) headquarters was Mark 16:15 ‘Go ye into all the world and preach the Gospel to every creature’. Pursuing this call had a physical and psychological cost. According to Evelyn Stocken (CMS Letters 1947), a missionary nurse at Quetta, ‘time and time again there comes the most awful moments of fear and depression, and an overwhelming sense of one’s utter inadequacy’.

During the 1920s, 1930s and 1940s, women of the two leading Anglican societies – the evangelical CMS and the high-Church Society for the Propagation of the Gospel (SPG) – faced countless disappointments in their evangelistic, educational, and medical work, agonising disputes with their colleagues, vocational crises, illness, exhaustion, home sickness, and loneliness. The six thousand miles between England and the mission station often seemed an unbearable barrier. At Christmas, a special time of fellowship, feasting, and family, one might expect women’s feelings of separation from the beloved people, places, and traditions of home to have been more acute, and their sense of India’s difference to have been magnified. In reality, however – goat’s flesh curry aside – Christmas in the mission field was not so solemn or so strange. 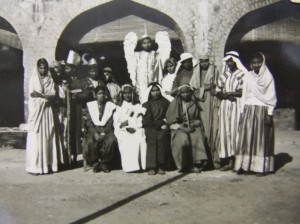 There was much of the familiar in mission festivities. While Indian churches might have differed in architecture from those at home, they housed the same services. Festal Evensong took place on Christmas Eve and the Eucharist was celebrated on Christmas morning. Christians from surrounding villages journeyed to the central mission station to take part. As in England, carols were sung, the Church was decorated, and parishioners made a particular effort to look their best.

In her Nurse’s Indian Log-Book (p. 80), Hettie rejoiced in finding the Church at Murhu packed with over three hundred communicants:

As I saw the crowds of jungley [sic] men with their nice shiny, curly hair and fancy combs, and red-bordered chuddas, all going so quietly and reverently up to the altar, and heard all the remaining congregation softly singing “O come let us adore Him,” one felt how truly and really the King of Kings was there.

Christmas lunch followed the Eucharist. The menu might have been radically different to that in England, but customary Christmas overindulgence seems to have been very much in evidence. ‘What joking and laughing, and what quantities of rice people ate!’ Hettie exclaimed (Log-Book, p. 81). ‘I feared for the consequences to some tiny schoolgirls, who put away two huge plates of rice, and were being pressed to have more.’

As at home, missionaries took care to ‘deck the halls.’ Mission compounds were adorned with coloured lights, flowers, greenery, and paper chains. The Jewel in the Crown also embraced Prince Albert’s renowned import. ‘The Christmas tree was such a success…’ Inez Bosanquet reported to members of SPG’s Missionary Preparation Union in 1931 from Ramnad. Although often mango or banana trees rather than firs, trees in the compound were decorated with candles, streamers, silver stars, and presents. Pupils and parishioners gathered round to sing carols and, at some point in the festivities, the tree was stripped and its treats distributed.

The tiny girls… had dolls, but everyone else had a bag containing exciting things like pencils, notebooks, needlebooks, beads, soap… and some had little pictures as well.

These gifts were sent to India by the mission’s supporters in England. In Ramnad’s case, they had been collected by a suburban Girls’ Club. Such gestures reminded women missionaries of their part in a global Church. They were not alone.

Much fun was also had in organising Nativity Plays. ‘Nothing delights the children more than being allowed to act, and nothing delights the grown-ups more than seeing the Bible stories come to life before their eyes,’ wrote Monica Churchill from Ahmednagar (SPG Letters 1941). On Christmas Eve, children from the mission’s school performed a Bethlehem Tableaux for Christians from the surrounding villages. Sometimes a real baby played the part of Jesus.

For women missionaries, therefore, Christmas in the foreign field was a happy mixture of East and West. Women’s enjoyment of familiar traditions was intensified in the very different Indian context. The costumes in the Ahmednagar Nativity Play were plain, the scenery a stone wall, and the lighting dim. Yet, in Monica Churchill’s eyes (SPG Letters 1941), the Christmas story was ‘remarkably vivified by this eastern representation…’ In contrast to well-oiled, crusty productions in cosy English halls perhaps, the children’s reverence and the simple surroundings breathed fresh life into the well-known story. Here also was an opportunity to teach and inspire those for whom the story was not so familiar: new converts, catechumens, and the ‘heathen’ masses. In India, the Nativity Play was not so much traditional entertainment as ‘an act of real devotion in preparation for Christmas Day.’ The joys of feasting and present-giving were also increased in a context where treats were far rarer. Words of thanks and praise seemed more sincere. For once, missionaries could reap immediate rewards of their service.

Christmas was also a moment of success and celebration, a moment in which the local Christian community came together to rejoice. The drudgery and difficulties of everyday life in the mission – of caste divisions, child marriages, and recalcitrant converts – could be briefly forgotten. Women missionaries took pleasure and inspiration from full churches and the palpable enthusiasm of attendees. On Christmas morning, in a packed church of Indian converts carolling lustily, the gap between the ideal of missionary service and the harsh realities was momentarily narrowed. Hettie Monkhouse’s comment (Log-Book, p. 79) about the Eucharistic celebration at Murhu typifies women’s views of the entirety of Christmas festivities in India: ‘I do not think I could have enjoyed an English one more…’

It appears that Hettie Monkhouse, SPG missionary at Murhu, Chota Nagpur, was the author of A Nurse’s Indian Log-Book. Being Actual Incidents in the Life of a Missionary Nurse (Westminster, 1924), judging from the Archives of the United Society for the Propagation of the Gospel, Rhodes House, Oxford. CWW323. Missionary Preparation Union (Women’s Division). Leaflets and Circular Letters c.1920-1940. Advent, 1929.