Healthcare, voluntarism and the state in twentieth-century Ireland and Britain

I recently made my first visit to Dublin. Being invited to workshops is always nice, and when you get to go somewhere new that’s even better. So this was a real treat for me. It must be a treat for every historian – it’s a city just dripping with history.

Even just on the coach coming into the city, a particular building grabbed my attention. There was just something about it, I was sure I knew it. When I looked it up, the building was the General Post Office that played such a crucial role in the 1916 Easter Rising. What I hadn’t seen from across the road was the bullet holes still visible in the columns.

But the treat for me wasn’t just being in a city of history and Guinness. I spent Friday at an excellent workshop organised by Trinity College, Dublin’s Dr Sean Lucey with Oxford Brookes University’s Professor Virginia Crossman on the theme of ‘healthcare, voluntarism and the state in twentieth-century Ireland and Britain’. 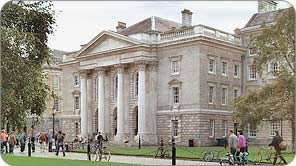 The workshop was hosted by the Centre for Contemporary Irish History and was opened by a few words from its director, Professor Eunan O’Halpin. His sardonic comments on the lack of job opportunities and how it’s only going to get worse had those of us looking for our first post-doc positions laughing as a better option than crying. And then he made the interesting point that comparative approaches are especially important for understanding the history of Irish voluntarism, as we hope to move beyond the idea that papacy explains all failures in care services.

Then on to the papers. There was a range of papers covering British and Irish cases, voluntary and public healthcare, physical and mental health history.

Dr Martin Gorsky from the London School of Hygiene and Tropical Medicine gave the keynote address on ‘Voluntary hospital histories: questions, methods and findings’. This gave a comprehensive picture the work of himself and others in the past decade and more, and the various conceptual approaches that have been taken. This gave a great introduction to the British research for an overwhelmingly Irish audience – giving them a platform for comparison as we came on to a series of papers focusing on Ireland.

Dr Ciara Breathnach of the University of Limerick spoke on the Irish history of public health nursing. This was a gap in public provision that was filled by a voluntary network of primarily Anglo-Irish middle-class women under the leadership of Lady Rachel Dudley from 1904. The most interesting aspect of this for me was the way these women were able to occupy a domestic space from which medical professionals were often excluded. This led to a debate during questions on different maternal mortality rates in urban and rural areas. It will be interesting to see where research on that side leads. Dr Breathnach suggested that the depth of poverty in the rural west of Ireland reversed the trends identified by Irvine Loudon.

Dr Oonagh Walsh from University College Cork spoke on the history of Irish District Asylum system and what would today be called intellectual disability in Ireland. Dr Walsh emphasised that this system only treated those deemed curable. Others, including the ‘tranquilly demented’, ‘idiots’, ‘imbeciles’ and epileptics were largely treated in the workhouses. She discussed the various influences on the Irish system, including British legislation such as the nineteenth-century Dangerous Lunacy Acts, an Irish religious dimension, and a unique legislative system that associated mental ill health with criminality.

Dr Sean Lucey’s paper explored the mixed economy of healthcare in early twentieth-century Ireland. Where Dr Gorsky’s paper had outlined the situation in Britain, Dr Lucey offered us some points for comparison. For example, he distinguished the various types of hospital service provider at the time. Here the public assistance hospitals developing in the 1920s seem to be rather like those former poor law municipal hospitals appropriated by local authorities in Britain in the 1930s. However there were ways in which Ireland was notably different such as the semi-voluntary county hospitals. He went on to a detailed discussion of the place of payment in these different types of hospitals.

That led on nicely to my paper on payment in the British voluntary hospitals. Around the beginning of the twentieth century a number of factors including greater technical capacity and demand for services as well as difficult economic times led the hospitals to turn increasingly to payment from patients. I looked at the various types of payments that operated at the time, emphasising that most provision continued to be focused on working-class patients, while middle-class patients were excluded from free or subsidised admission and could only use the voluntary hospitals on a commercial basis. These private provisions never took over the voluntary hospitals as they did in the US, but remained marginal. The final part of my paper looked the situation in Ireland, or really Dublin – where payment was more common.

Professors Virginia Crossman of Oxford Brookes University and Greta Jones of the University of Ulster led a roundtable discussion at the end of the day. One question that rolled over from the two payment papers was how much we should be comparing British and Irish situations, or alternatively looking at Dublin and London as different from the rest of Ireland and the rest of Britain. Dr Breathnach’s paper had also raised urban/rural distinctions, while Dr Walsh left us thinking about Anglo-Irish networks, both of policy and care.

Professor Crossman widened out the discussion, saying the papers had made her think about the frameworks for how change takes place and how we think of and analyse that change. While Professor Jones asked some more specific questions, such as what the impact of the 1911 National Insurance Act had been in Ireland. There were, she said, many topics much discussed in the British historiography, where we know very little about the Irish experience.

3 Responses to Healthcare, voluntarism and the state in twentieth-century Ireland and Britain